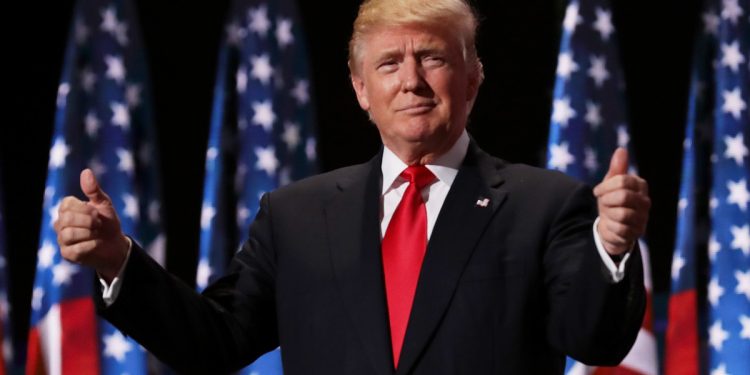 Beginning his term with a promise to ensure that the “Forgotten Men and “Women” of the United States were forgotten no longer, and theme of an “America First Presidency”, translating into Foreign and Domestic Policy Objective, President Donald J. Trump took office as the 45th President of the United States.

During the first 100 days of his Presidency, President Trump issued Executive Orders that saw a ban on five Muslim countries, signaling the dawn of a new era. In the coming years and over the course of his Administration, President Trump will record and tout domestic policy achievements including the construction of the Southern Border Wall, the passage of VA Choice, VA Accountability, Right to Try, Criminal Justice Reform, the appointment of three Justices of the US Supreme Court and nearly 300 Federal Justices. The achievements will also include rebuilding the United States Military, and launch of the United States Space Force – new branch of the United States Armed Forces over the past 75years.

For Foreign Policy accomplishments, signing the Abraham Accords to restore peace to the Middle East, and being the only President in modern history to avoid the start of a fresh new “foreign” war, as well as the killing of Qasem Soleimani, the Iranian General widely considered a national security threat to the United States – known for masterminding the bombings of the United States Embassy in Baghdad and US targets in Iraq, as well as the killing of Al Baghdadi, leader of the renowned terrorist group, ISIS. Other foreign policy success includes the recognition of Jerusalem as the Capital of Israel and subsequent relocation of the US Embassy from Tel Aviv to Jerusalem.

For Economy, the Trump Administration will take pride in delivering the largest package of tax cuts and reforms, replacement of the North American Free Trade Area (NAFTA) with the United States-Mexico-Canada Agreement (USMCA), renegotiation of various trade deals, achieving the lowest unemployment in US history, and setting of numerous stock market records. Also, during the Trump Administration, the United States became the world’s number one producer of oil and natural gas, achieving energy security and boosting the economy of the United States.

For his handling of the COVID-19 pandemic, despite over 400,000 persons dying since the outbreak – the worst of any developed country in the world, the Trump Administration takes credit for the rapid production of two coronavirus vaccines courtesy Pfizer and Modena, large scale production of PPEs and ventilators, and passage of nearly USD4trillion in stimulus relief packages.

In spite of the above accomplishments, the withdrawal of the United States from the rest of the world including global organizations and treaties such as the World Health Organization (WHO), Transpacific Partnership Agreement and Paris Climate Accord, and labelling of African countries as shithole countries whilst doing little to advance the circumstances of these nations seemed to betray long cherished values of American leadership and diplomacy.

Again, the Administration and President Trump’s handling of electoral disputes following the 2020 US Presidential Elections and the accompanying assault on electoral laws and US democratic institutions have undermined US democracy in the eyes of the world, thus, failing to preserve and protect same, undermining the very institutions and system of government he swore to protect, hence his impeachment from office – becoming the first President in US history to be impeached twice during his term in office, with 38% approval rating – the least by any US President after a first term in office .

The writer, Andrews Maxford, can be contacted via email at [email protected]