Members of the University of Health and Allied Sciences Chapter of the Federation of Universities Senior Staff Association of Ghana have joined their counterparts across the country currently on strike in solidarity with demands made by the Teachers and Education Workers Union (TEWU).

They are to lay down their tools effective Wednesday, January 27, 2021.

TEWU members embarked on strike on January 13, 2021, to protest the failure of the government to implement a negotiated decision on the working conditions of members of the union.

Even though the leadership of TEWU issued a statement calling off the strike action, effective 19th January 2021, members of TEWU on some university campuses across the country including the University of Health and Allied Sciences remained on strike.

FUSSAG UHAS chapter declared a strike in a letter addressed to the registrar of the University jointly signed by Alexander Agbenyo and Jeffrey Nii Otu Larkai, Secretary and President respectively that, “the Executive Committee of FUSSAG-UHAS has decided that all FUSSAG members of UHAS should, from tomorrow, join the ongoing strike action declared by Teachers and Educational Workers’ Union”.

The statement however excluded staff of the newly opened UHAS basic school.

“Mindful of the fact that the UHAS Basic School has just started operations today, the basic school teachers are hereby exempted from this strike action until further notice”, the statement said. 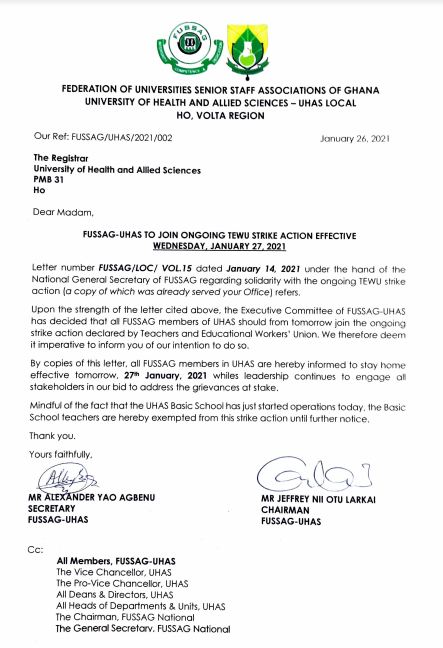