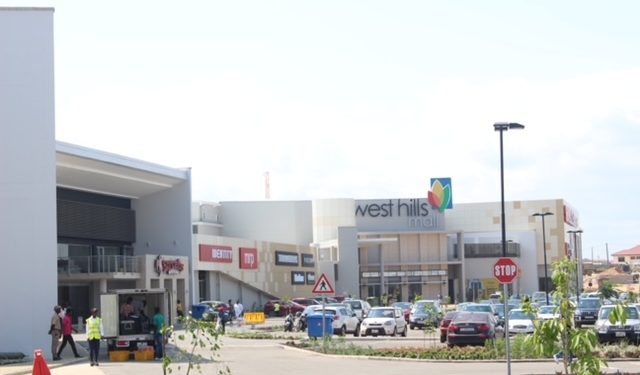 Collaboration between the management of West Hills Mall and the Police, with the support of a prospective victim, derailed a well-knit employment scam, leading to the arrest of a man suspected to be a member of a syndicate of fraudsters that uses Accra’s major Malls to extort money from young, unsuspecting job seekers.

Police CID officers arrested Mr. Maxwell Yanzy, a resident of Kasoa, at the Las Palmas Restaurant in La Paz, as he filled out fake employment registration forms for jobs at West Hills Mall for Mr Augustine Baah and another supposed victim – an undercover security man at West Hills Mall. Mr. Baah, the primary victim had been charged to pay a total of Ghc 500.00 for the employment forms and registration processes.

The incident began to unfold on the evening of December 11, when Mr. Augustine Baah, a resident of Gbawe in Accra-West desperately seeking employment at the mall, approached West Hills Mall authorities, claiming to be following up on a job offer he had received earlier from West Hills Mall.

Mr. Baah told Centre management officials that his mother had given him the phone number of a senior official of the Mall who, he said, is working to get him a job at the mall after he has completed the mall’s employment formalities and paid the requisite fees.

Mr. Bernard Denkyi, the Operations Manager, was immediately alerted and it was made clear to Baah that the so-called job offer he had been promised was phony and that he could be the victim of a scam. Mr. Baah subsequently agreed to assist the West Hills Mall Management to bring the suspect to book, proceeding to share the suspect’s phone number and all the voice and SMS communication that had transpired between the two since the previous day.

Mr. Baah also disclosed that he was scheduled to meet with Yanzy at Las Palmas, a popular eatery at Abeka La Paz the next day, to fill out employment registration forms and pay a fee of Ghc 500.00 to the suspect.

Mall Management then alerted the police at La Paz about the impending rendezvous, and as part of their plan, successfully managed to introduce West Hills Mall’s security chief to the suspect as a close friend of Baah who also happens to be keen on getting a job at the mall.

On Saturday, December 12, the suspect was busy filling out employment registration forms for the two ‘job-seekers’, Baah and the undercover security man, when plain-clothed police swooped in and arrested him.

Maxwell Yanzy was transferred from the La Paz Police Post to the Weija District Police Headquarters which, according to Police sources, has full jurisdiction over the case. Sources at the Criminal Investigations Department (CID) at Weija explained that the Weija Police Command has a special interest in the case because West Hills Mall has all too often been used as bait by employment fraudsters.

Indeed, over the past few years, almost every major mall in the country, including Achimota Retail Centre (Achimota Mall) and the Kumasi City Mall, have become targets of such employment scams. West Hills Mall’s Management has occasionally cautioned the general public about the activities of employment fraudsters who extort various sums of money from unsuspecting job-seekers.

“We have announced on many occasions and on different platforms that West Hills Mall is not an employer or a recruitment agent for our tenants….and neither would the Mall or its tenants offer jobs privately to any individual or charge employment or registration fees for job placements. We find it rather strange that people continue to fall for these schemes,” the Operations Manager, Mr. Bernard Denkyi, told prying newsmen.

Mr. Denkyi commended Augustine Baah for taking the trouble to do a follow-up at the mall, adding that unlike most of the previous cases of employment-related extortion in which the scammers were not traceable because they confined their activities online and insisted on payments via MoMo, this was easier to pursue because the suspect strangely opted for direct payment with cash.
Mr. Maxwell Yanzy has since been arraigned before Court and has been remanded to re-appear on a later date.
Previous Post