427 dams, 42 warehouses were completed under my tenure – Hawa Koomson 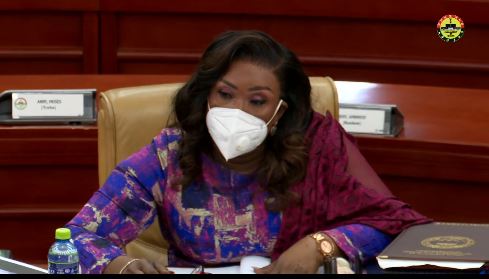 The defunct Special Development Initiatives Ministry was able to construct some 427 dams and 42 warehouses under various projects; its former Minister, Mavis Hawa Koomson has said.

Madam Koomson who is now the ministerial nominee for Fisheries and Aquaculture made the observation during her vetting in Parliament on Thursday, February 18, 2021.

She noted that although the Ministry had a target to achieve per its developmental project agenda, it was unable to finish all as planned and that those that were successfully completed are being put to good use.

Touching specifically about the dams, Hawa Koomson said “our target was to construct 560 dams because one constituency had no site for the dams. There are about 471 active sites and 427 have been fully completed.”

The Minister-Designate explained that although they promised to construct dams under the “One Village, One Dam project” it was impossible to give every village a dam within four years.

“There are more than 5, 0000 villages across the Northern Region and there was no way we could finish constructing 5,000 dams in four years. We, therefore, set a target of 10 dams in each constituency”, she added.

The construction of warehouses was part of the government’s “One District, One Warehouse” initiative under the Infrastructure for Poverty Eradication Programme (IPEP) to among other things reduce post-harvest losses.

The provision of storage was to essentially ensure a continuous flow of agriculture produce, create opportunities along the agriculture value chain and also support the implementation of government’s “Planting for Food and Jobs” initiative.

But providing an update on the level of progress thus far on the project, the former Minister said, 42 of such facilities have seen total completion nationwide.

“Our target was to build 50 warehouses. As I speak, 42 have been fully completed and eight others were between 80 and 90 per cent done as of October 2020 when I got a report from the consultant. The completed ones include one in Sandema, two in Tamale and two in Techiman. Eight has also been completed in the  Western and Western North Regions.”

Knowing about smart contract on block-chain