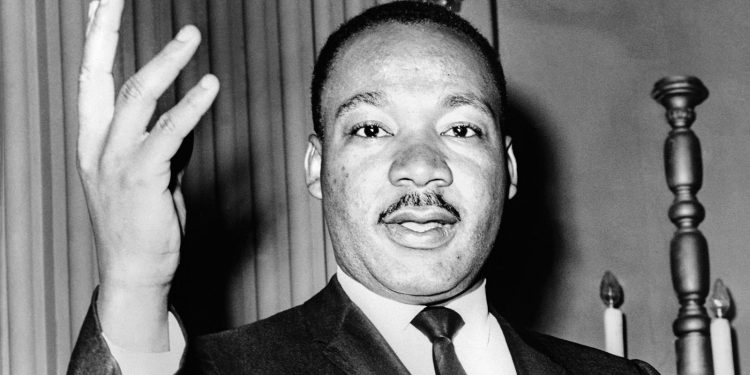 When you understand why Martin Luther King Jr. is so dominant in our history books, especially, if you studied politics in the university, you will understand that society is always at war with thought.

This war, which society seems to win mostly, regardless of how crude the method used, never ends because there will always be folks who cannot and would not bow to the standards society shove on them when they were in the cradle.

What I may say about the reason the Rev King dominates black history you may doubt.

But, the society that ensured he was eventually killed, engraved and made more accessible the thoughts he championed most of the time. I mean, even in the writing of black history, the Euro-Centric perspective shapes who is represented and who is not.

The moment there was a hint about Rev King reneging the belief that non-violence could bring about change, he was gunned down.

Malcolm X, in one of his public lectures, said,

“The racialist never understands the non-violence language. He’s spoken his language to us for 400 years. We have been the victim of his brutalities. We are the ones who face his dogs that tears the flesh from our limps, only because we want to enforce the Supreme Court’s decision. We are the ones who have our skulls crushed not by the Klu Klux Klan but by policemen only because we want to enforce what they call the Supreme Court’s decision. Any time you live in a society supposedly based upon law, and it doesn’t enforce its own law because the colour of a man’s skin happens to be wrong, then I say, those people are justified to resort to any means necessary to bring about justice while the government can’t give them justice.”

He was a long target and was eventually killed by the United States.

Just last week, the daughters of Malcolm X requested that the murder investigation be reopened in light of new evidence. A policeman, Raymond Wood, at the time of the 1965 killing, alleged in his deathbed letter that the New York police and the FBI conspired in the murder.

When you understand that Malcolm X was more realistic in the fight for justice for black folks than the Rev King, it becomes clear why his deeds and words are sidelined.

An empire, which the U.S. was and largely still is, wants to be in control of the human race for the foreseeable future and as such it will not tolerate disagreements even if it’s on justice, even if the empire is the one perpetuating injustice.

In one of the last videos of Baldwin, he is captured asking, somewhat angrily to the white population, “how long do you want for your progress?”

So how long does the white population want for their progress?

I guess by now you understand why the posture of the Rev King will be tolerated by the empire whereas the slightest note of dissent will be snuffed out. They want forever.

You may have a soft spot for the Rev King but, I think, the only reason he is dominant and other highly influential people of that important era is less written or spoken about is that society does not want people to think too much.

Think about this, the black man, believing that he is capable to run his own affairs was one of the crucial reasons that kick-started the civil rights movement in the U.S.

However, it is important to note that societies will maintain injustices as long as it feeds the machine that keeps that society running.

But is it wrong to think too much, thus, to take up the war between society and thought, when you are thinking to liberate yourself and your people?

Kofi Boateng writes on culture and politics. He holds a Bachelors Degree in Communication with a specialized interest in Journalism from the Ghana Institute of Journalism.