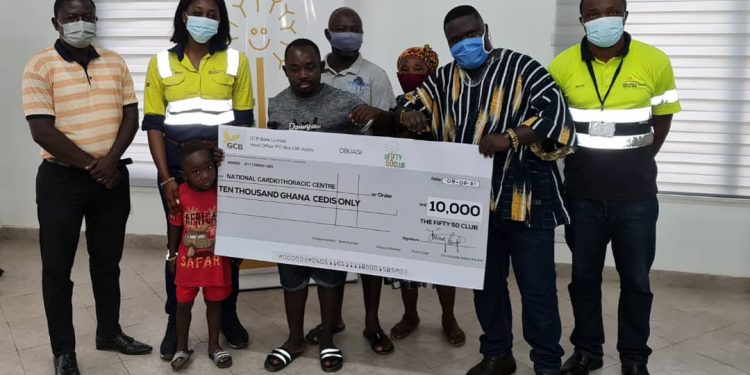 A group of employees at the AngloGold Ashanti Ghana (AGAG) Club Fifty-50 has donated an amount of GH¢10,000 to the country`s National Cardiothoracic Centre.

The said amount is to facilitate the surgery of a 5-years-old boy, Godwin Asare a resident of Obuasi who is suffering from complete heart block which stifles his normal breathing.

The Club’s president, Mr. Jacob Acquah said the group decided to help Godwin when the Assembly Member of Anyinam Community where the family of Godwin Asare resides together with his Unit Committee Members wrote to the group to solicit financial support for the ailing boy.

An amount of €3,750 which is equivalent to Gh¢27,000 is needed to complete the surgery to correct anomalies in the boy`s breathing. The father of the boy, Edward Asare in an interview thanked Club Fifty 50 for coming to his child aid.

He further extended his acknowledgment to the editor of ObuasiToday.com, Charles Wudengba for his support. He called on other philanthropists to come to his family aid to complete the full payment needed for Godwin Asare`s surgery

Godwin Asare is suffering from a hole-in-heart condition called Ventricular Septal Defect (VSD) which was detected when he was just 4 months old.

After an open heart surgery at the Korle-Bu Teaching Hospital in September 2019 which cost the father US$6,000 (GHc34, 000), he developed another condition called complete heart block which makes his heartbeat too slow.

Club Fifty 50 was formed by a group of employees of AngloGold Ashanti Ghana to support sustainable programs to improve the health, educational, and socio-economic wellbeing of residents of communities in and around Obuasi, and in future extend to other parts of the country.

They are currently made up of 108 members which include employees from AGAG affiliated companies (AGA Malaria Control, AGA Foundation Hospital), Contractors, and individuals outside Ghana.

The Club aims at carrying out charitable initiatives while contributing to the achievement of the United Nations Sustainable Development Goals (SDGs).