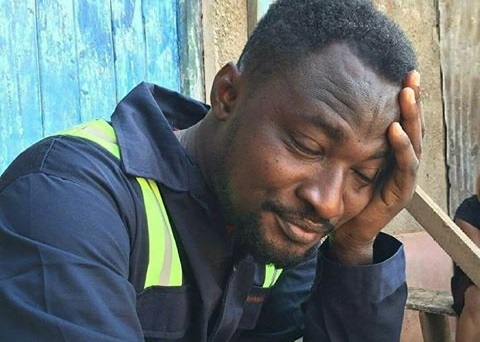 Funny Face, who was picked up by the police on Sunday, was placed behind bars and put before court on Monday.

This comes after he was arrested for allegedly firing a gun in public last week.

In a video he posted today, Funny Face is seen in handcuffs, seated between two officers in a police vehicle.

He indicated in his post that he was taken to the police cells on Sunday afternoon and put before the Ofaakor circuit court.

A few weeks ago, he posted a document that suggested that he had, earlier in December, visited the hospital and had been diagnosed with depression.

Funny Face, after his first marriage hit the rocks, has had a lot of issues with the mother of his kids, Ama Vanessa.

Last year, he accused some of his friends in the showbiz fraternity of instigating all the problems he had with Vanessa.

About four months ago, he put up a lot of videos accusing Vanessa of abandoning his home. He also alleged that the lady used to abuse him in the past.

He launched attacks on his in-laws and people who sought to resolve the misunderstanding he had with Vanessa.

Ama Vanessa later came out to dispute all the allegations, adding that she was no longer interested in any relationship with the comedian.

Currently, they have three children together.