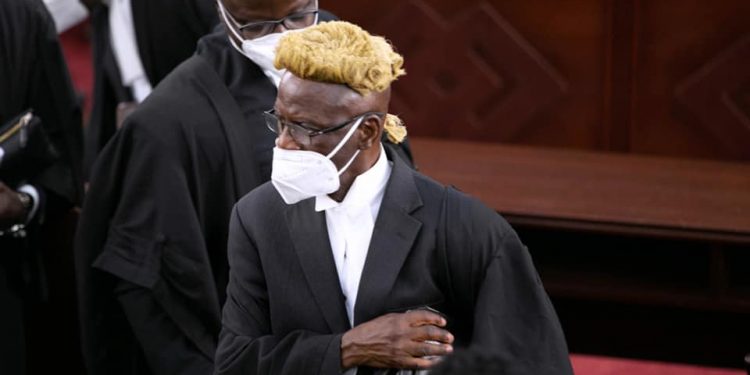 Lawyers for the Electoral Commission (EC) and President Nana Akufo-Addo, 1st and 2nd Respondents in the ongoing election petition are kicking against a motion filed by the petitioner, John Dramani Mahama to reopen his case.

Mr. Mahama and his legal team filed the application hoping to also subpoena the EC Chairperson to testify if the request is granted.

This was after the Supreme Court’s unanimously upheld an earlier motion filed by the legal teams of the first and second respondents not to call any witnesses.

But in court, today, Monday, February 15, 2021, counsels for the respondents raised several counter-arguments explaining to the Supreme Court Justices why the petitioner should be stopped from reopening his case.

Lawyer Akoto Ampaw, legal representative for Nana Akufo-Addo pointed out that the leave the petitioner is seeking is against legal processes for proof of burden.

Petitioner’s counsel, Tsatsu Tsikata sparred that their side intends to call Madam Jean Mensa, the EC Chair in person as an “adverse witness” and not his office in particular.

He continued to make a strong case in court today as to why Mrs. Mensa ought to mount the witness box and testify in order to bring “the truth” to bear.

Tsatsu Tsikata reiterated his position that not having the EC Chair cross-examined will be an affront to the dispute at hand.

“The Chairperson of the 1st Respondent has in an affidavit made clear that the petitioner will in no way be prejudiced because the questions that the petitioner sought to have in interrogatories will be subject in cross-examination,” Mr. Tsikata told the court.

However, for counsel for the EC Chair, Justin Amenuvor, the application being sought by John Mahama should be denied because it is “an abuse of the court processes” since reopening of cases to subpoena a witness has never happened in a court.

Meanwhile, the apex court having heard the concerns raised by all the lawyers of the parties in the case has adjourned the hearing to Tuesday, February 16, 2021, to rule on the matter.