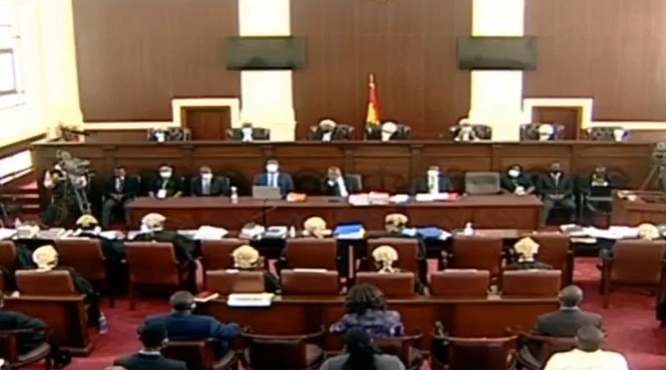 The hearing of the 2020 Election Petition at the Supreme Court this week saw the continuation and conclusion of cross-examination of John Mahama’s first witness, Johnson Asiedu Nketiah on Monday, February 1, 2021.

The cross-examination ended with the second respondent, Nana Akufo-Addo’s lead counsel, Akoto Ampaw putting questions to the witness and requesting answers aimed at discrediting the witness’ own statement. 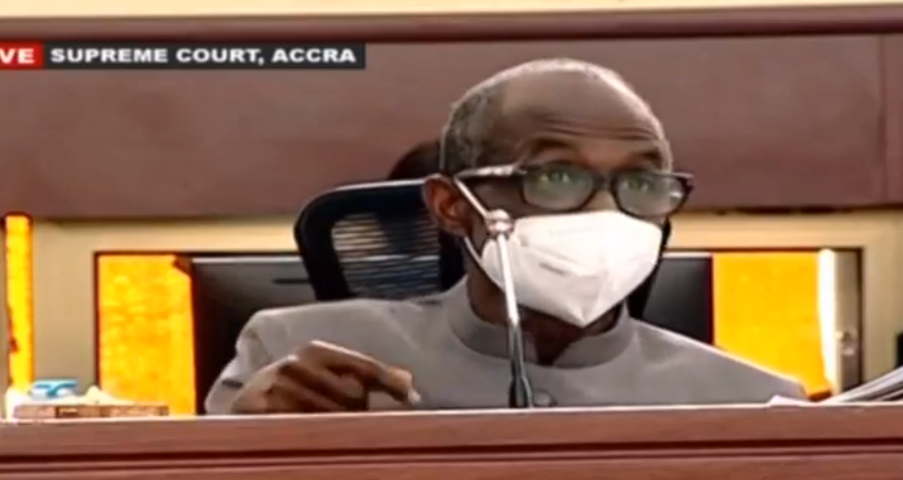 Prior to the commencement of the day’s sitting, Chief Justice, Kwasi Anin-Yeboah cautioned Frank Davies, one of the lawyers representing Nana Akufo-Addo against granting media interviews at the end of sittings.

He said the court was “uncomfortable” with Mr. Davies’ interviews because it was unethical and goes against the Legal Professional conduct and Ethical Rules of 2020.

“Mr. Frank Davies, we respectfully want to draw your attention to the Legal Professional Conduct and Ethical Rules of 2020. If you look at rule 38, the court is not comfortable with the post-trial interviews that you grant outside,” he said.

Quoting the rule, Justice Anin-Yeboah said, “A lawyer who is practising or has participated in the investigation or litigation of a matter that is still pending before a court shall not make an out-of-court statement or grant an interview to the media on the matter.”

The caution, according to the Chief Justice, applies to all lawyers introduced in court as being involved with the case.

On Tuesday, February 2, 2021, the petitioner, John Mahama, through his lawyers filed an application to inspect EC’s documents.

Dr. Michael Kpessa-Whyte, Mr. Mahama’s second witness mounted the witness box on that day and was taken through cross-examination mainly carried out by lawyer for the Electoral Commission (EC), Justice Amenuvor.

The cross-examination ended with Mr. Kpessa-Whyte insisting that the EC Chairperson, Jean Mensa instructed him and Mr. Rojo Mettle-Nunoo to leave the EC Strongroom and go to confer with Mr. Mahama on issues about some irregularities.

He said the instruction was a trick to ensure that the two were out of the room, so the election results could be declared.

Mr. Kpessa-Whyte, however, conceded that he did not speak directly with Jean Mensa.

On that same day, John Mahama’s lawyers sought leave from the court to present a potential third witness who was later revealed to be Rojo Mettle Nunoo.

Their request included the fact that the witness, due to a health situation could not be physically present in court.

The court did not sit on Thursday.

On Friday, February 5, 2021, the court administered the oath of a witness to Rojo Mettle-Nunoo who joined proceedings via online video conferencing.

Akoto Ampaw objected to 23 paragraphs out of 32 of Mettle-Nunoo’s statement.

After hours of argument for and against the objection, the court struck out five of the paragraphs.

The court thus adjourned hearing to Monday, February 8, 2021, for the cross-examination of Rojo Mettle-Nunoo.

Four in critical condition after shooting incident near Songor lagoon

Four in critical condition after shooting incident near Songor lagoon