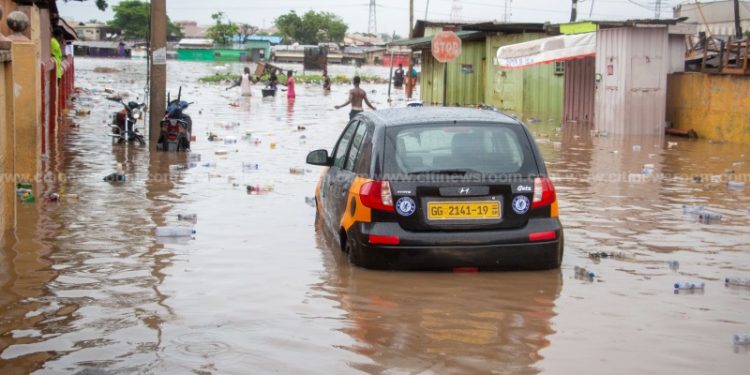 Residents in Kpone Kantamanso Municipality have called on the government to step up measures to fix bad roads in the area before the perennial floods hit the communities.

In a random survey, most residents told the Ghana News Agency at Kpone near Tema that as the rains approached, residents leaving in flood-prone areas such as Shanghai, PS Global, Shalom Estate Kokompe, and other areas feel threatened.

According to the residents, there were series of floods recorded in previous years, which led to the destruction of property that adversely affected the socio-economic state of the community.

Some market women in the Kpone Municipality said they were fed up with the situation as they had made several appeals to the authorities without positive results.

“I usually don’t go to the market to sell during the rainy season because the place becomes flooded and during those times, what to eat is a problem, I was among those who embarked on a  demonstration exercise some time ago, but nothing has been done.

“It is sad how the authorities are not thinking about us,” Madam Esther Nortey, a trader told the GNA.

Madam Nakie Tetey also a trader said “As for me, I’m even tired of the road issue, we have made a lot of complaints but still, our leaders are just careless and insensitive”.

Some drivers also said they were worried about low patronage ahead of the rains as people were unable to commute from their homes to town adding that there were communities they could not go to because of the flood.

“It also affects our cars, as we spend more money on spare parts. Every week you have to visit the mechanic shop, we burn more fuel to commute to and from, and generally, it affects our cost of living,” Mr. Enough Abakah, a commercial driver said.

Mr. Abakah said there were some communities “I don’t drive to in the raining season because your car will get stuck. I’m praying the authorities will do something about the roads before the rains set in”.

Some parents also expressed concern about the impact on education, as pupils are not able to go to school regularly.

Madam Cynthia Asiedu, a resident said, “The roads are just not motorable and that makes it difficult going to work and my kids going to school, the roads need to be fixed”.