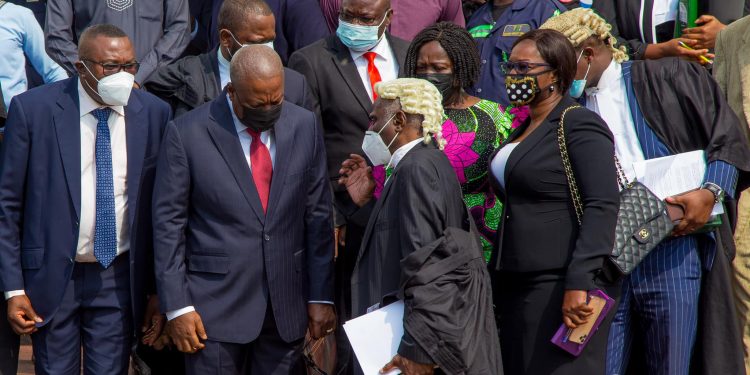 The Supreme Court has dismissed an application filed by the instigator of the 2020 election petition, John Mahama, seeking to have his case reopened.

“We dismiss the instant application as being wholly without merit,” Chief Justice, Kwasi Anin-Yeboah said in a ruling he read on behalf of the nine panelled Supreme Court justices constituted to hear the case.

Although Mahama had through his lead lawyer, Tsatsu Tsikata closed his case, he tried everything he could within the laid down processes to have the case reopened in a bid to have the Chairperson of the Electoral Commission, Jean Mensah subpoenaed and cross-examined.

An earlier attempt by Mahama to reopen his case failed as the justices of the Supreme Court said they were not convinced by the arguments advanced by his legal counsel.

Mr. Mahama through his legal team claimed the Supreme Court’s earlier ruling was a travesty of justice as it was fraught with errors hence the filing of the latest review application.

The lead counsel for the petitioner, Mr. Tsatsu Tsikata in ending his arguments in support of the application urged the justices to decide by their conscience and the judicial oath.

Mr. Tsikata concluded his submission with a quote from the Bible — Hosea 8:7– which states that: ”For they have sown the wind, and they shall reap the whirlwind: it hath no stalk; the bud shall yield no meal: if so be it yield, the strangers shall swallow it up”.

Meanwhile, the nine-panel justices in a unanimous decision on Monday, February 22, 2021, insisted that they were still not convinced by the reasons for the demands being sought by Mahama and his legal team and went further to throw out the case.

Chief Justice Anin-Yeboah, said the application was dismissed because it was not within any known law or rules of practice within any jurisprudent.

The justices of the apex court also disagreed with arguments by Mr. Tsikata that the earlier ruling was a miscarriage of justice.

The apex court also explained that the decision to testify or not resides on the Electoral Commission and not the chairperson since Jean Mensa is not a party to the case.

Anin-Yeboah in the ruling also said some of the submissions from Mahama’s legal team had no basis in law.