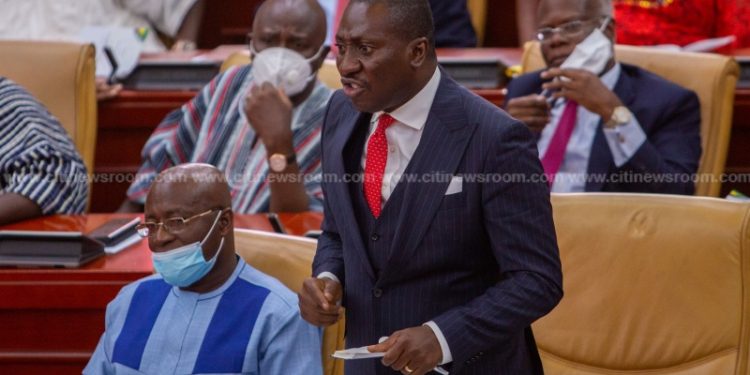 The Deputy Majority Leader in Parliament, Mr. Alexander Afenyo-Markin has defended government’s decision to introduce new levies in the 2021 budget.

Government is seeking to introduce four new levies and increase other existing ones this year.

Some of the levies in question are COVID-19 health levy, Petroleum levy, Sanitation and Pollution levy as well as financial sector clean up levy.

While presenting the 2021 budget in Parliament on Friday, March 12, 2021, Caretaker Minister for Finance, Osei Kyei-Mensah-Bonsu explained that Ghana has over the years faced difficulties with the economy arising from high excess capacity payments in the energy sector and other non-recurrent expenditures.

“Despite the substantial progress made by the Akufo-Addo Government, there is the need to find additional resources to cover the excess capacity charges that have resulted from the Power Purchase Agreements (PPAs) signed by the previous Government which required payments for capacity charges even when the plants involved were idle or unutilised.”

“Mr. Speaker, it has become very necessary for Government to consider a review of the energy sector levies. The Energy Sector Recovery Levy of 20 pesewas per litre on petrol/diesel under the ESLA is hereby submitted to this House for approval”.

The Minority has however kicked against the decision.

They argued that the taxpayer is already burdened by the effects of the COVID-19 pandemic and will be worse off with the introduction of the new taxes.

But the Effutu legislator in a Citi News interview justified the need for the levies.

According to him, they are needed for the efficient management of the economy.

Alleged military officer arrested for robbery not our personnel – GAF

Alleged military officer arrested for robbery not our personnel - GAF