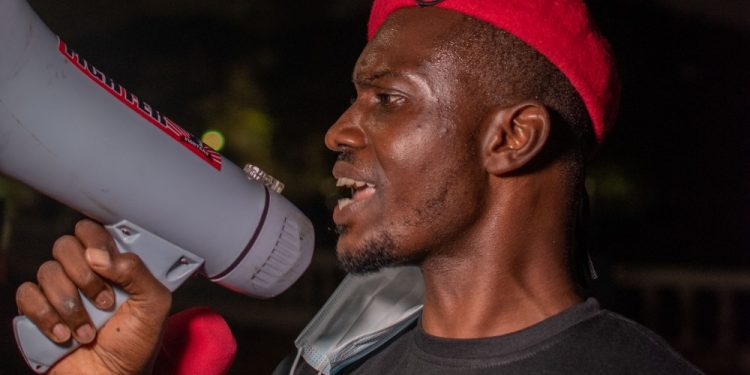 The Accra Circuit Court 10 has discharged leader of the Economic Fighters League, Ernesto Yeboah of charges of breach of the public order law.

This follows the Republic’s withdrawal of the charges against the outspoken campaigner for national economic liberation.

Ernesto Yeboah was arrested and charged with breaching the public order act following a June 1, 2020 vigil held in honour of 46-year-old American, George Floyd, who was killed by Minnesota Police under bizarre circumstances.

The incident attracted global condemnation in which governments, including the Government of Ghana, spoke in unison against the ills of racist-induced police brutality.

Ghana’s Economic Fighters League joined in this global action dubbed, Black Lives Matter, with a vigil at the Independence Square which was disrupted by police on the night.

The Ghana Police Service had accused the Movement of non-compliance with provisions of the Public Order Act which require police notification prior to such gatherings.

Even though the Movement insisted it had served the police with the required prior notification, police sources say the said notification had not reached the police at the time of the vigil.

In court on Monday, March 15, 2021, however, Prosecutor, Chief Inspector, Emmanuel Haligah, told the court that the State was no longer interested in pursuing the charges.

Though reasons were not immediately assigned for the State’s sudden move after 9 months of prosecution, the court went ahead to strike out the case as prayed by the State.

Citi News also gathers that several “Black Lives Matter” Campaigners had started mounting pressure on the State against the prosecution.

Sources say petitions had already been sent to Government on the matter.

It is however not clear whether the mounting international pressure is the reason for the withdrawal of charges.