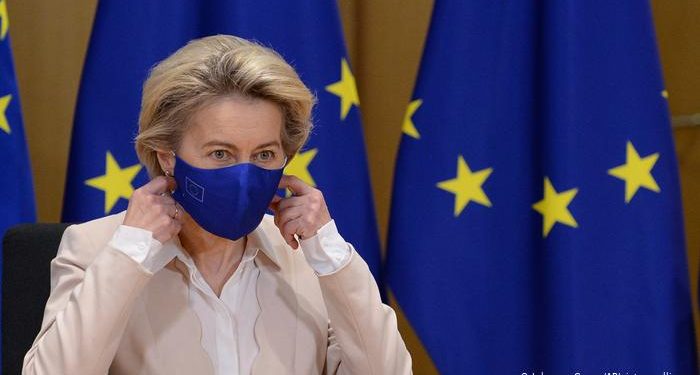 EU Commission President Ursula von der Leyen announced on Sunday that the bloc will  not share coronavirus vaccines with other countries until it has “a better production situation in the EU.”

“There is quite a bit of pressure on member states to obtain the vaccine for themselves,” she told Germany’s Funke Media Group over the weekend.

The announcement, which comes as the EU is facing a third coronavirus wave and renewed restrictions on public life, signalled an apparent reversal of the bloc’s earlier promises.

Von der Leyen had strongly campaigned for providing vaccines to people worldwide back in spring 2020. But most COVID vaccine doses continue to be administered in wealthy nations.

Von der Leyen, however, stressed that the EU would thrust its support behind the World Health Organization’s COVAX initiative, an effort to give developing countries access to vaccines.

“The EU has invested €2.2 billion ($2.6 billion) in this initiative. COVAX has already delivered 30 million doses of vaccine to 52 countries,” she said.

“I can’t explain to European citizens why we are exporting millions of vaccine doses to countries that are producing vaccines themselves and aren’t sending us anything back,” she said.

The EU has set up special mechanisms to limit vaccine exports. Manufacturers contracted to supply member states must declare if they intend to export doses outside the bloc.

Most of the EU’s concerns, however, are focused on the UK, where the vaccination campaign has progressed at a much more rapid pace.

The EU chief threatened to suspend exports of AstraZeneca’s COVID-19 vaccines if the bloc did not receive its promised deliveries first.

“We have the option of banning a planned export. That’s the message to AstraZeneca: you fulfil your contract with Europe first before you start delivering to other countries,” von der Leyen said, adding that the Anglo-Swedish pharma company had delivered only 30% of the 90 million vaccine doses it had promised for the first quarter of the year.

In response to the threats, UK Defence Secretary Ben Wallace said on Sunday that “the world is watching” how the EU responds to AstraZeneca’s shortfall in deliveries.

“It is counterproductive (to halt exports of vaccines) because the one thing we know about vaccine production and manufacture is that it is collaborative,” he said.

“They (the EU) would undermine not only their own citizens’ chances of having a proper vaccine programme, but also many other countries around the world with the reputational damage for the EU which they would find very hard to change over the short-term,” he added.

The EU has accused the UK of imposing its own de facto export ban. The claim was vigorously denied by the UK, however, there is no evidence to suggest that the UK has exported any COVID vaccines at all, as it relies on complex legal arrangements with manufacturers.

Meanwhile, the EU has exported at least 8 million doses to the UK.