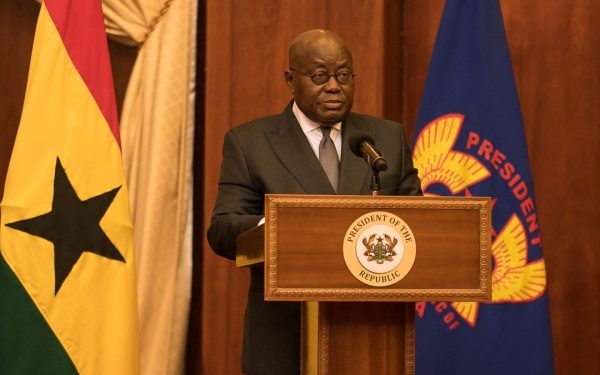 President Nana Addo Dankwa Akufo-Addo has responded to the Coalition of Civil Society Organizations Against Corruption insisting that his decision to retire Daniel Yaw Domelevo as Auditor General is justified.

It comes on the back of concerns raised by various civil society organisations who argued that the forceful removal of Mr. Domelevo was a travesty of Ghana’s fight against corruption.

They further demanded the reinstatement of Mr. Domelevo.

But President Akufo-Addo in a 21-page response signed by his Secretary, Nana Bediatuo Asante said claims that he deliberately hounded the Auditor General were erroneous.

The statement cited among other things, the hurried nature with which Mr. Domelevo was appointed into office by former President John Dramani Mahama after the ex-President’s “painful loss” in the 2016 general elections.

Akufo-Addo also accused Mr. Domelevo of owing allegiance to Mahama and not the nation.

Following the forced retirement, the CSOs took on the President describing his directive as unlawful and an affront to good governance.

Director of Advocacy and Policy Engagement at the Centre for Democratic Development CDD-Ghana, Dr. Kojo Asante for instance said, the action breaches Article 23 of the constitution.

“The questions regarding Mr. Domelevo’s date of birth which formed the recent basis for the President’s letter were not handled in accordance with the Constitutional directive in Article 23. The actions of the office of the President and the Audit Service affirm our belief that Mr. Domelevo has been unfairly targeted,” he said.

However, President Akufo-Addo while reiterating his support for constitutionalism and strong institutions of the state, maintained that “it is completely disingenuous on anyone’s part to suggest, even remotely, that the President has been removing constitutional officeholders that he met in office or that he has difficulty working with them”.

Domelevo’s allegiance was to Mahama not Ghana – Nana Addo

Domelevo's allegiance was to Mahama not Ghana - Nana Addo