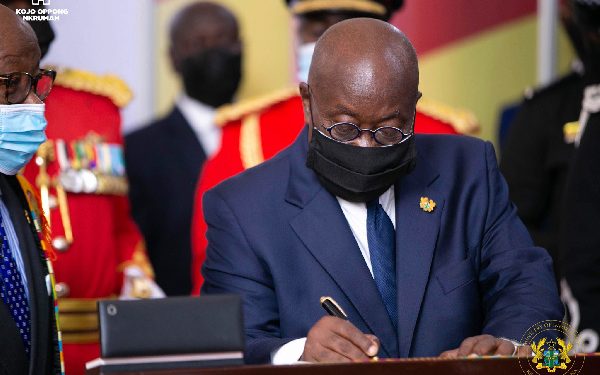 President Nana Addo Dankwa Akufo-Addo has described as excellent and well-reasoned, the Supreme Court’s judgment in the 2020 Election Petition case brought before it by former President John Dramani Mahama.

“I am particularly delighted as this message is the first of my second term, the validity of which was unanimously upheld last week in a well-reasoned and excellent ruling by a seven-member panel of the Supreme Court, presided over by the Chief Justice, on 4th March 2021”, he said on Tuesday in Parliament as he presented the State of the Nation Address.

President Akufo-Addo has therefore asked Ghanaians to accept the court’s ruling and forge towards dealing with challenges currently facing the country.

“The Supreme Court, for example, last week determined the challenge to the validity of the 2020 presidential election and affirmed its validity in a unanimous decision. The Court has spoken. It is time for all of us to move on, and, in a united manner, confront the problems of post-COVID Ghana”.

The Justices of the Court explained that the petition was incompetent, lacked merit, and raised no reasonable cause of action because the petitioner failed to prove his case via his petition or through his witnesses.

President Akufo-Addo, the candidate of the New Patriotic Party (NPP) took to social media to make the claim shortly after the apex court ruled that he was validly elected.

“On Thursday, 4th March 2021, the Supreme Court, in a unanimous ruling, affirmed my victory in the presidential election of 7th December 2020”, he posted on Twitter.

On Thursday, 4th March 2021, the Supreme Court, in a unanimous ruling, affirmed my victory in the presidential election of 7th December 2020. pic.twitter.com/TuJLuVxqDi

My government does not shy away from public scrutiny – Akufo-Addo

My government does not shy away from public scrutiny - Akufo-Addo