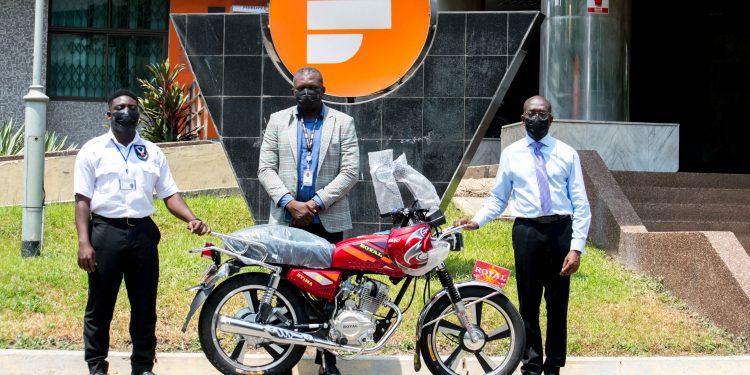 As part of Fidelity Bank Ghana Limited’s appreciation for outstanding staff performance, the bank has gone a step further by rewarding six (6) security officers who protect the various branches of the Bank with a brand-new royal motorbike (125A model) each.

The six security officers, awarded based on their credibility, appearance, punctuality, alertness at duty post and customer service skills, were chosen based on nominations from Branch Managers and endorsements by the Sector Security Coordinators.

Presenting the motorbikes to the security officers, Kwabena Boateng, Divisional Director, Corporate Banking, noted that “Selecting the outstanding officers was difficult but the winners are deserving of the recognition.”

Head of Physical Security at Fidelity Bank Ghana, Lawrence Ntim-Gyakari, added: “We understand that being a security officer is a difficult occupation that requires a special type of person to perform the role well. We are grateful that our security officers are committed to executing their roles at a very high standard and it is important that we recognize and reward them for this commitment and their excellent service.”

Fidelity Bank’s recognition of its security officer force is a first for the banking sector and it shows the bank’s commitment to support and acknowledge the contributions of its stakeholders to its success story.