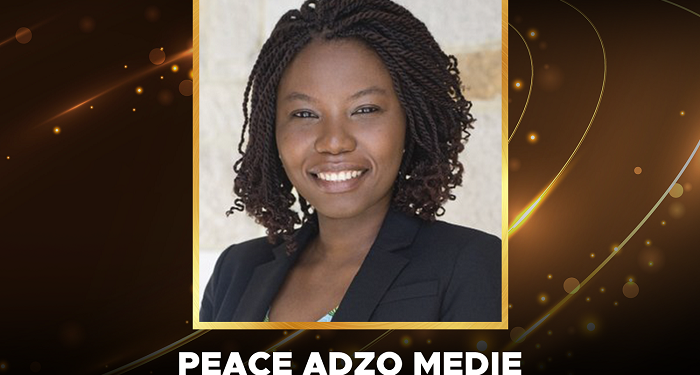 She beat off stiff competition from four other renowned book writers at the event held on Saturday night, March 27, 2021.

Peace Adzo’s book “His Only Wife”, earned her recognition for the year under review.

“I would like to say a big thank you to everyone and the organizers. I am so happy that I won the award”, Peace said after she was honoured with the award.

Other authors who were nominated in the same group included Kwamena Ahwoi’s famous “Working with Rawlings” and Ahwene Pa Nkasa: Standing with JDM written by Abdul-Rahman Harruna Attah.

The rest were Ambassador D.K. Osei for his “Privileged Conversations – Adventures of An African Diplomat book and Ayesha Harruna Attah’s “The Deep Blue Between”.

“His Only Wife” is a witty, smart, and moving debut novel about a brave young woman traversing the minefield of modern life with its taboos and injustices, living in a world of men who want their wives to be beautiful, to be good cooks and mothers, to be women who respect their husbands and grant them forbearance.

Ms. Adzo creates a delightfully spunky and relatable heroine who just may break all the rules.

The book since its publication has not only been appealing to the reading community in Ghana but also those across the globe.

The writer is a senior lecturer in gender and international politics at the University of Bristol in England.

Prior to that, she was a research fellow at the University of Ghana.

She has published several short stories, and her book  Global Norms and Local Action: The Campaigns to End Violence Against Women in Africa was published by Oxford University Press in 2020.

Peace Medie is an award-winning scholar and has been awarded several fellowships.

The Entertainment Achievement Awards was to celebrate entertainers and entertainment industry players who have distinguished themselves in the practice of their art during the 2020 eligibility year.

The scheme covered areas such as sports, music, film, fashion, photography, media, comedy, among others.

The hosts for the event were Citi FM/TV’s AJ Sarpong and Kwaku David.

It was powered by Citi FM, Citi TV, and sponsored by Good Day Energy Drink.

The event also was live on eTV, DGN TV and on all Citi TV portals.