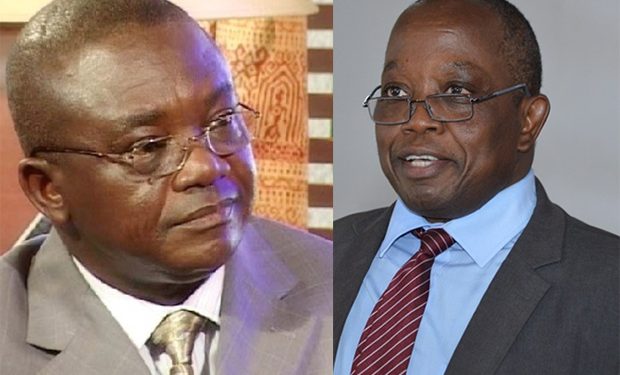 The Chairman of the Audit Service Board, Professor Edward Dua Agyeman says the embattled Auditor-General, Daniel Yao Domelevo, is considered a retired official whose tenure expired in June 2020.

According to him, documents available to the board proves that Mr. Domelevo’s date of birth is 1st June 1960 and not 1st June 1961 as he claims hence was due to go on compulsory retirement last year.

Speaking on Eyewitness News, Prof. Dua Agyeman said Mr. Domelevo through previous documents he signed himself confirms his 1960 birth year and his nationality as a Togolese and not a Ghanaian.

“As far as we know, the documents are authentic, our information is authentic, he should have retired in 2020, and therefore he is deemed to have retired,” he said.

The Audit Service Board through a series of correspondence with Mr. Domelevo who was sent on compulsory leave last year, is challenging the nationality and retirement age of the latter.

The board stated amongst other things that records from SSNIT showed that Mr. Domelevo was born in 1960 and his home tome was Agbatofe in Togo.

“Records at the Social Security and National Insurance Trust (SSNIT) completed and signed by you indicate your date of birth as 1st June 1960 when you joined the scheme on 1st October 1978. The records show that you stated your tribe as Togolese and a non-Ghanaian. That your home town is Agbatofe.”

“On 25th October 1992, you completed and signed a SSNIT Change of Beneficiary Nomination form, stating your nationality as a Ghanaian and your home town as Ada in the Greater Accra Region. The date of birth on your Ghanaian passport number A45800, issued on 28th February 1996 is 1st June 1961. That place of birth is stated as Kumasi, Ashanti Region,” one of the letters from the board to Domelevo stated.

Mr. Domelevo in a written response to the letter explained that his grandfather was a native of Ada in the Greater Accra Region but migrated to Togo and stayed at Agbatofe.

He indicated that his father Augustine Domelevo migrated from Togo to the then Gold Coast.

“Either my father wrongly mentioned Agbatofe in Togo as his home town to me, or I misconstrued it at the time… My mother is also a Ghanaian,” he explained.

But the Audit Service Board in a letter dated March 2, 2021, said Mr. Domelevo’s explanation of his nationality and narration of his grandfather’s migration is irrelevant.

The Board Chairman, Prof. Dua Agyeman told Umaru Sanda on Eyewitness News that Mr. Domelevo cannot deny the records and to the extent that there is no legal document to indicate a change in the stated nationality and date of birth, the board holds the old documents to be true.

“It is not me, it is his own records showing it, and he filled forms and signed himself so if it is otherwise, he has to find a legal instrument to prove that he has changed it or the first one is wrong… In public service we deal with documents and the documents he signed himself, shows that he is Togolese,” he stated.

With Mr. Domelevo expected to return to office today after he was directed by the presidency to take his 167 accumulated leave in 2020, it is unclear how events will play out as the board maintains that he is a retired official.

According to Prof. Dua Agyeman, he can’t confirm if Mr. Domelevo will return to the office saying “that is not my business.”

“It is for him to accept from his own records that this is the case. I don’t think that he will deny it. He knows. I don’t know whether he is coming or not but that is not my business…Let’s wait till tomorrow comes.”

He said the proper authorities will know what decisions to take on the issues especially those that bother on issues of illegality.

Domelevo expected to return to work today despite Audit Board challenge

Audit Service Board attitude towards Domelevo ridiculous and unfortunate – CDD

Audit Service Board attitude towards Domelevo ridiculous and unfortunate - CDD