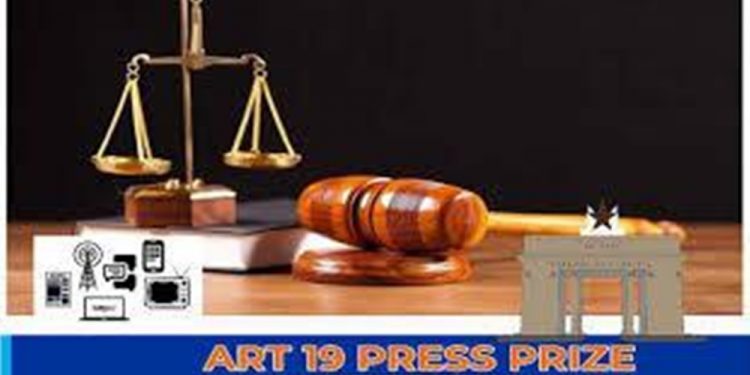 African Heights Foundation in partnership with the Open Society Initiative for West Africa (OSIWA) has announced three journalists as winners of the maiden edition of Article 19 Press Prize.

Joojo Cobbinah’s “as if we weren’t humans” was adjudged the overall winner, followed by Daily Graphic’s Emmanuel Hawkson and Edward Adeti of EIB network respectively.

Beatrice Spio-Garbrah of Media General TV3 won a special prize for the best female entry with her story on the lack of a Juvenile correctional home in the Ashanti Region.

The winner went home with GHS10,000 whereas the 2nd and 3rd swept home GHS 6,000 and GHS3,000 respectively. Each of them took home a plaque and a certificate of honour.

The Article 19 Press prize is an annual award by the African Heights Foundation in partnership with the Open Society Initiative for West Africa (OSIWA) to encourage journalists to report on the ills of the country’s criminal justice system. 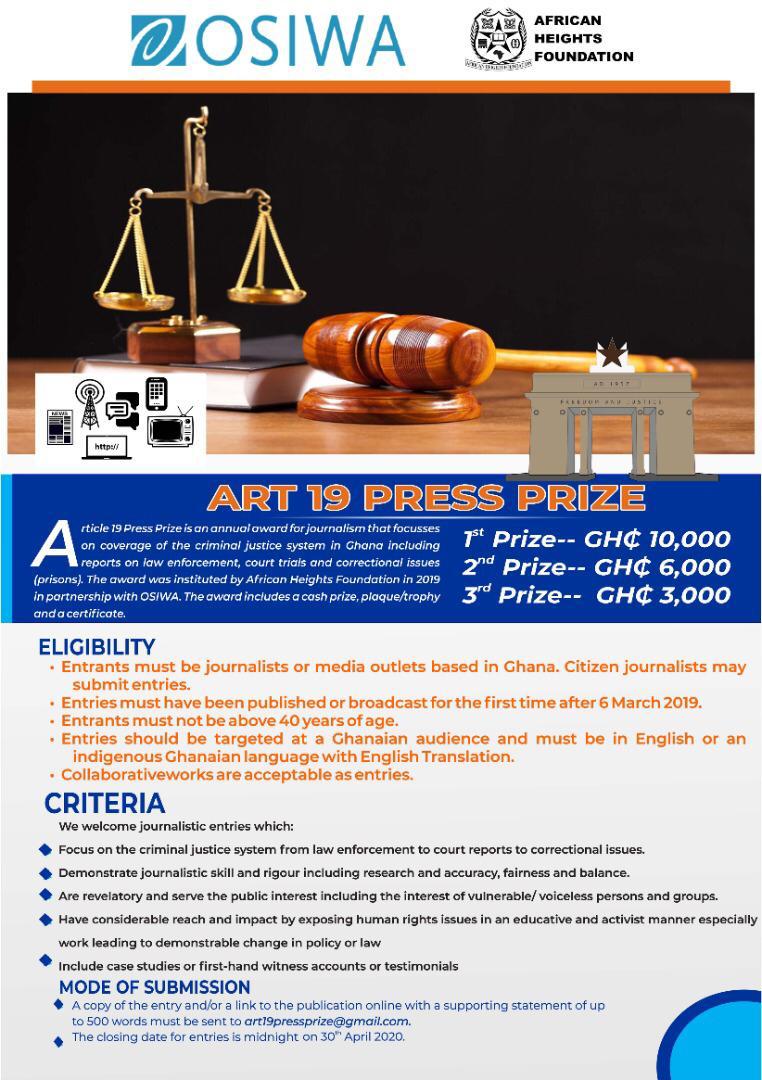 This piece revived cold cases and sought to give victims some form of closure. In this story, he found out what happened to a young man in his 30’s who was shot in the head by the police but survived miraculously.

The family engaged the police on several occasions but the police maintained investigations were ongoing. This piece highlighted the plight of Elias.

There was another case where a joint police/military team allegedly raped 4 girls in Nalerigu at gunpoint. One of the rape victims said a gun was put in her mouth with threats of pulling the trigger if she screamed.

It also highlights the plight of 4 boys tortured by military men in Sunyani who were coerced to confess to stealing a laptop. Following constant follow-ups, on the story, the Commission on Human Rights and Administrative Justice (CHRAJ) was forced to release a report that indicted three military personnel for torturing. The children were awarded compensation packages

In this story, Daily Graphic’s Emmanuel Ebo Hawkson narrates the plight of  Charles Twumasi, who ended up in prison for a crime he did not commit.

Emmanuel Hawkson in an interview said “I have seen many stories similar to that of Twumasi in my five years of reporting from the law courts for the Daily Graphic. Many times, the police conduct little or no investigations in defilement cases. It is normally the victim’s word against that of the accused person. No medical examination is conducted in most cases and even it is done, it is skewed against the accused person. As I sat in the Court of Appeal listening to the three Justices discharge and acquit Charles Twumasi, I asked myself why it had to take seven years for the criminal justice system to realise that Charles Twumasi was innocent,” he bemoaned.

“The story was, therefore, not only to tell the world that Charles Twumasi was innocent and was now a free man, but it was also meant to highlight the flaws in our criminal justice system and how it continues to oppress people despite the extensive human rights listed under Article 19 of the 1992 Constitution,” he added.

In this piece, Edward Adeti of EIB network exposes the corruption at the Attorney generals office in Upper East Region

Edward Adeti in an interview said he went undercover to unravel the alleged rot at the Attorney-General’s Department.

“One of the serious cases the department was prosecuting at the time of my undercover investigation involved a suspect, Mohammed Awal, who was standing a rape trial at the Bolgatanga High Court. The same suspect is also on the Interpol list for alleged involvement in some robbery cases in Burkina Faso. I decided to investigate this trial. The state’s attorney in charge of that case was Emmanuel Lawrence Otoo-Boison.”

“During my undercover investigation, Mr. Otoo-Boison, took bribes, made an attempt to extort cash, and advised a crime suspect whom he was prosecuting in court to go into hiding after getting court bail,” he added.

Beatrice Spio-Garbah of Media General brought to light the lack of a Juvenile Correctional Home in the Ashanti Region.

“Ashanti Region is Ghana’s second-largest city in Ghana. But it has no juvenile remand or correctional home. Juvenile offenders are kept in what is termed ‘Child Friendly’ Police cells while on trial. After their conviction, these juvenile offenders are sent to the Correctional Home in Accra. The situation where the offenders are kept in the Child-Friendly Police cells affects the needed interaction that Social welfare workers should have with the juveniles and also their counselling sessions. These among others were the motivation for this Report,” she explained in an interview.