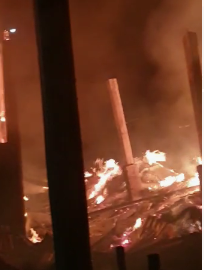 About 40 students of the Nsutaman Catholic Senior High School in the Sekyere Central District of the Ashanti Region have had their belongings destroyed after two separate fires razed the top floor of the school’s girls’ dormitory.

Tuesday morning’s fire was the second such incident in the same location, in less than 24 hours.

The students were in class when the incident happened.

The fire destroyed bunk beds, books, and other items belonging to the students.

The headmistress of the school, Victoria Assher who confirmed the incident to Citi News said, “Around 1:20 pm a student came out and saw the fire. She quickly called out and the teachers and students made an attempt to put it out while we were calling the Fire Service. Before they [Fire Service] came, we had already started the fight so they came to continue.”

“Two rooms were totally condemned, we couldn’t recover anything. For the other rooms, the roofs were destroyed. Those who were admitted now, about 40 to 50 students, do not have anything except what they were wearing,” she stated.

She added that those affected have been temporarily accommodated at a dormitory meant for Form Three students who are currently on vacation.

“We have taken some temporary measures. Form 3 students are yet to be in school so some spaces for them have been filled and the other students left have been taken to a classroom block.”

Victoria Assher further appealed for help to enable the school to recover from the destruction as soon as possible.