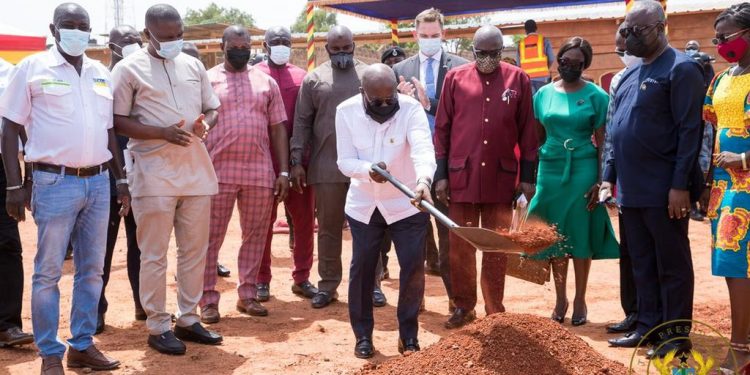 The Head of State Award Scheme is unhappy some Ghanaians are attacking the President, Nana Addo Dankwa Akufo-Addo for cutting sod for the construction of the GHS5 million Ghana Award House.

According to the Secretariat, the attacks on the President are unwarranted.

Last Wednesday, the President came under intense criticisms for breaking the grounds for the project.  Social media critics were of the view that the construction was a misplaced priority.

On Wednesday, 7th April 2021, I cut the sod for the commencement of construction of the “Ghana Award House” – a new administrative building for the Head of State Award Scheme. pic.twitter.com/0v6KCeji9N

But the Scheme in a statement said such concerns are borne out of lack of understanding of the functions of the Award House.

“We have observed the misunderstanding circulating on various media platforms about the sod-cutting ceremony for the construction of the Ghana Award House by H.E Nana Addo Dankwa Akufo-Addo. We are indeed grateful for the feedback and believe it’s due to a misconception about the Award Scheme. We however condemn the unwarranted attacks on the persona of H.E Nana Addo Dankwa Akufo-Addo for undertaking this honorary responsibility as Chief Patron of the Award Scheme.”

It further said, the Award Scheme provides a rewarding agenda that fills the gap left by formal tuition and equips young people for life and work.

Furthermore, it builds their confidence and engages them with their communities to make a difference to themselves and the world at large.

The Ghana Award House is expected to be completed within 36 weeks.

When completed, it will house a two-storey office block, a 200-capacity conference room, and training facility.

It was conceived in 2003 when a parcel of land was secured for its construction after which there has been a lot of partnerships and investments for its realization.

The Scheme stated that fundraising for the Award House started in May 2016 when HRH Prince Edward, The Earl of Wessex, paid a working visit to Ghana in support of the operationalization of the Head of State Award Scheme.

“We take this opportunity to invite all well-meaning Ghanaians who believe in youth development to join hands with us in our mission of equipping all young people for life and work. We wish to thank the President of the Republic of Ghana and Chief Patron of the Award Scheme for taking time off his busy schedules to do us the honours”, the statement concluded.