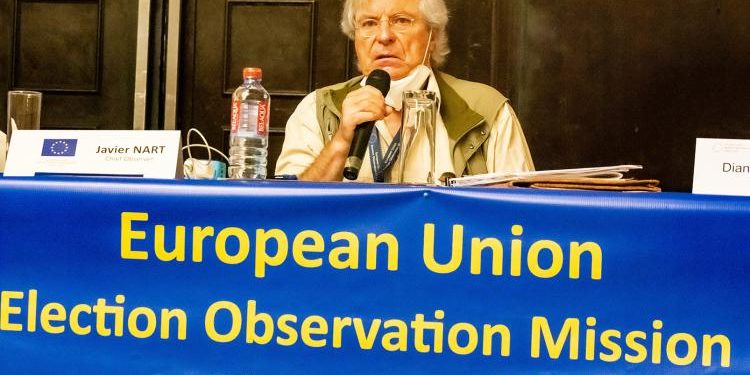 EU’s Election Observation Mission (EOM) final report on Ghana’s 2020 election says that the state broadcaster, GTV, favoured the governing New Patriotic Party (NPP) in its coverage ahead of the polls.

It said 26.2 percent of airtime on election-related news programmes focused on activities of the NPP while 15.8 percent was allocated to the opposition National Democratic Congress (NDC).

On coverage given to the presidential candidates of the two parties, the report noted that the NPP’s Nana Akufo-Addo, who was the incumbent President, was given a lot more attention, compared to his main challenger, John Mahama, while indicating that the coverage was generally neutral.

“GBC, overall, provided fair opportunity to all political contestants through various programmes aired by both GTV and Uniiq FM.74 Nevertheless, the EU EOM’s media monitoring findings show that GTV favoured the NPP by allocating it 26.2 percent of airtime in its election-related news and programmes, compared to 15.8 percent allocated to the NDC. Furthermore, the NPP and its presidential candidate benefited from extensive additional coverage on GTV (22.1 percent of airtime) through news and live broadcasts of inaugurations and projects launched by the President or government representatives, often including campaign songs and messages. Focusing only on the coverage received by presidential candidates, the difference of airtime is slightly higher, with Nana Akufo-Addo receiving 33 percent and John Mahama receiving 19.1 percent of airtime in the state-owned TV. The tone of GTV’s reports, however, was generally neutral,” excerpts of the report read.

Per the report, a similar trend was observed on state-owned Uniiq FM where the NPP enjoyed 34.2 percent of airtime as against the NDC’s 28.6 percent.

It also observed that 11 percent of additional airtime was given to coverage of government inaugurations and projects.

According to the observer mission, the media and journalists in Ghana covered the elections in a generally free environment “but circumstances deteriorated slightly after the polls.”

It said it recorded four cases of journalists being attacked and injured while covering collation procedures in Accra.

Another incident it noted was the interruption of a live interview of an NDC candidate on Nyce FM in the Central Region by armed soldiers.