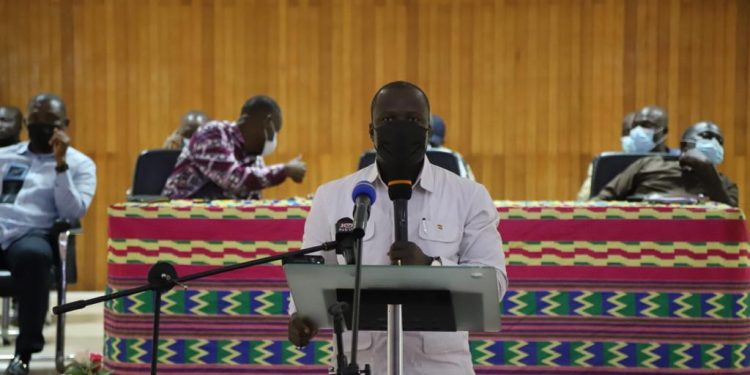 The Lands and Natural Resources Minister, Samuel Abdulai Jinapor has called on traditional leaders and small-scale miners to help the government develop a mining industry that will serve as a catalyst for national development.

Illegal mining remains a threat to the Ghanaian economy, he said.

Addressing small-scale miners in Tarkwa on Tuesday, April 27, 2021, the Lands Minister told the gathering that prospecting and reconnaissance licences have been suspended in all forest reserves and water bodies across the country.

He also announced that from Friday, April 30, 2021, all mining equipment in those areas should be evacuated.

The Minister said there was an urgent need for all stakeholders to work together to protect the forest cover, water bodies which he described as “Red Zones” or “No-go areas”.

He further stated that the illegal mining menace is a national problem that requires national action.

The Member of Parliament for Wa Central, Dr. Rashid Pelpuo, who was at the meeting noted that “we are supporting the Minister and the government because this is an important national assignment to save our environment”.

The Chairman of the Parliamentary Select Committee on Mines and Energy, Samuel Atta-Akyea also called for a collective effort from Ghanaians to stop illegal mining.

He pointed out that environmental degradation has no party colour, stressing that there is an urgent need for miners to “mine the right way to save and protect the environment for future generations”.

Traditional leaders at the forum lauded government for the steps it has taken to curb the illegal mining devastation nationwide.

They pledged the commitment of Nananom in the Tarkwa area to continue to support government in evicting the draggers on the water bodies and help government reclaim the degraded lands in the area.

Nananom also called for the involvement of chiefs in the licensing acquisition process to enable them play a pivotal role in ensuring sanity in the small-scale mining sub-sector.

The Small-Scale miners Association also expressed concerns about the lack of minable lands and financial support for their operations which the Lands and Natural Resources Minister and his entourage resolved to tackle.