Journalist was arrested over attempted extortion and false news – Police

The Police administration claims that the Editor-in-chief of WhatsUp News, David Tamakloe was arrested for attempted extortion and publication of false news.

In a statement signed by the Head of Public Affairs of the Criminal Investigations Department, DSP Juliana Obeng, the law enforcement agency further denied allegations that it arrested Mr. Tamakloe at gun point.

It was reported on Thursday, April 1, 2021 that the police had arrested a journalist, Mr. David Tamakloe a yet-to-be published news article.

The reports said the journalist was arrested in a “rambo style” at gun point and was whisked away to the Airport police station.

But the police in the statement sought to justify their action indicating that the arrest was effected because the actions of Mr. Tamakloe contravened section 18(1) and 151(1) and section 208 of the Criminal Offences Act, 1960 (act 29).

They said the suspect has been granted a Police enquiry bail and is expected to report on Tuesday, April 6, 2021. 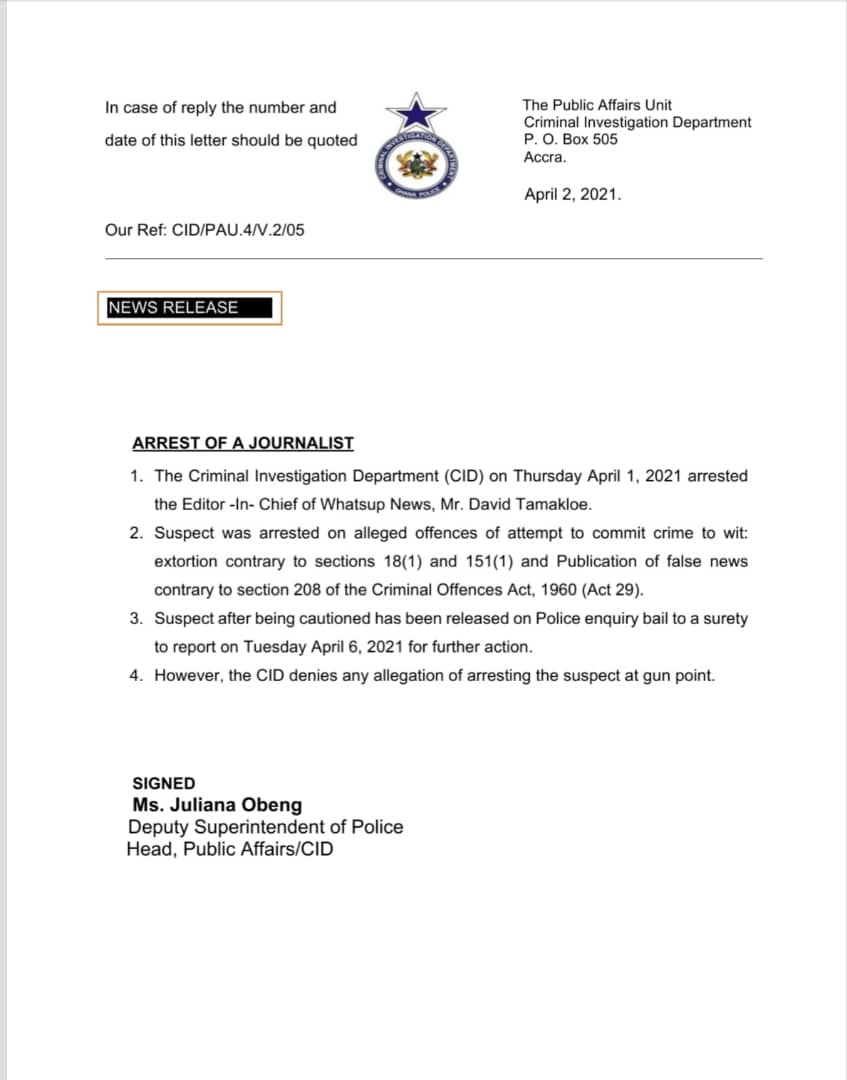 Following the arrest, the Member of Parliament for South Dayi, Rockson Dafeamekpor told Citi News the action by the security officials smacks of abuse of police powers.

“It is Easter, for Christ’s sake, he should have his freedom and then Monday or Tuesday, he can come back. Initially, they said he was trying to blackmail someone who had gone to complain, but when they got to the station, the charge was the publication of false information. His lawyer asked where the publication they were alleging was a fraud was, but the police could not produce any evidence or publication of the sort.”

He added that he thinks the arrest is just an attempt to stop the story from going public which is not right.

Meanwhile, lawyer for the journalist, Edudzi Tamakloe has challenged the police’s statement, suggesting that their claim that the suspect attempted extorting money from someone is false.

GRIDCo not being truthful about current power challenges – Kwabena Donkor

GRIDCo not being truthful about current power challenges - Kwabena Donkor