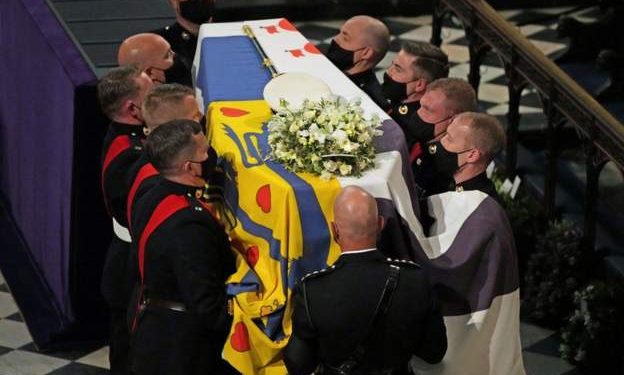 When future historians come to retell the story of the pandemic, the image of the Queen sitting alone, masked and in mourning, will surely rank among the most poignant.

The Duke of Edinburgh’s final farewell at St George’s Chapel was like no other royal funeral. And though not a family like any other, with mourners limited to 30 and only the pallbearers not socially distanced, it was in no small way symbolic.

There was as much military pageantry as could be safely mustered in Windsor Castle’s quadrangle, ablaze in crisp sunshine with ceremonial uniforms and richly embroidered guidons and colours, the flags of regimental units, all draped in black crepe. There were television cameras instead of impersonal Zoom links.

But the royal family was not spared the brutal impact of restrictions the virus has inflicted on the hundreds of thousands of grieving Britons who also have been forced to say goodbye to loved ones in a manner not of their choosing.

The sense of sparseness was inescapable. A coffin borne through a chapel nave emptied of seats and housing a tiny choir of four, the sounding of bugles and trumpets and bagpipes echoing off its bare stone walls and fan-vaulted roof. It was not the sendoff long planned for 99-year-old duke, who died on 9 April.

The Queen, in black and wearing Queen Mary’s eye-catching Richmond brooch, arrived in the state Bentley, other senior royals in a fleet of Rolls Royce Phantoms. Stripped of the ceremonial carapace of military uniforms, those who walked behind the coffin, in step and in silence, somehow appeared more vulnerable in morning and day dress with medals.

Eyes, inevitably, were on the grandsons, Princes William and Harry, amid reports of their rift. Physically separated in the procession by their cousin, Peter Phillips, their eyes remained front-facing throughout, betraying nothing.

The siblings were seated apart and directly opposite on different sides of the 15th-century quire aisle, William with Kate, Harry alone. He had not seen his family for a year. The Duchess of Sussex, who is pregnant and was advised not to fly, was said have watched the service on television at home in California.

At the end of the service, however, William and Harry chatted as they walked with Kate up the hill towards the castle.

Prince Andrew also sat alone, two seats away from his mother. Prince Charles and the Duchess of Cornwall were on the opposite side of the aisle to the Queen.

Inside the Gothic splendour of the chapel, a Royal Marines bearer party carried the coffin to the catafalque draped in purple velvet in front of the altar, on which were placed nine cushions bearing his insignia.

The Queen and senior royals, all masked, were seated beneath the banners of Garter knights and ladies, in the home of the most ancient British order of chivalry, to which Philip was installed in 1948 by George VI. The duke’s own banner, emblazoned with his coat of arms, was removed on his death, along with the heraldic accoutrements of his sword, helm and crest. His Garter stall plate will remain, and a traditional Garter laurel wreath was placed in his stall.

Pared back, the service focused on the essence of a man who was essentially self-deprecating and who, the Queen once said, “doesn’t take easily to compliments”. There was no eulogy, and no sermon.

Tributes were left to the two clergy present. The dean of Windsor, David Conner, praised his “kindness, humour and humanity” and said the nation was “ inspired by his unwavering loyalty to our Queen”. The archbishop of Canterbury, Justin Welby, gave thanks for “ his resolute faith and loyalty” and his “high sense of duty and integrity”.

The Garter King at Arms read the duke’s 15 styles and titles aloud, not a bad tally for a man born a penniless royal with the worthless title of Prince Philip of Greece almost a century ago.

Tightly stitched with sailors’ deft throughout the service was the thread of a Royal Navy man. His Admiral of the Fleet naval cap and the sword gifted on his wedding by George VI, surmounted the oak coffin, which was covered in his personal standard and the Queen’s wreath of white flowers – lilies, roses, freesia, wax flower, sweet peas and jasmine.

A piping party on boatswain’s whistles piped nautical gangway custom, the Still used to call crew to attention as the duke’s modified Land Rover hearse stopped at the chapel door; and the Side, used to welcome senior officers aboard, as pall bearers carried the coffin on to the west steps and paused for a national minute silence; and the Carry On, the call for crew to resume duties, as the coffin was slowly borne inside, the chapel doors closing behind it.

Though scaled-back, 730 armed forces personnel still took part in the ceremonial, among them, representatives of HMS Magpie. The latest addition to the Royal Navy’s hydrographic squadron, it is named after Philip’s only command on the anti-submarine frigate HMS Magpie from 1950-51.

Minute guns were fired from the castle’s east lawn, and the castle’s Curfew Tower bell tolled during the eight minute procession. A national minute’s silence began and ended with guns fired from saluting stations around the UK and in Gibraltar.

Headed by the band of the Grenadier Guards, their drums draped in black, the procession was led by senior military figures, including the chief of defence staff, General Sir Nick Carter, as befitting a decorated second world war veteran and accomplished commander before marriage demanded he sacrifice his career. “We all have a huge regard for him,” Carter said before the service. “We have a huge regard for his wartime record and the care that he showed for veterans and for those still serving, and it’ll be a sombre moment for us, but it will also be a celebratory moment, I think, because it was a special life and a life that was well-lived.”

Dismounted detachments from the Household Cavalry’s Life Guards and Blues and Royals stood to attention outside the chapel, and serving personnel from the Marines, the RAF, the Highlanders, ceremonial bodyguards and the Military Knights of Windsor all lined the procession route. The Windsor Castle Guards turned out on the parade ground.

A piped lament, The Last Post, and the Reveille all sounded as the service came to a close. Then Action Stations , a seven second bugle call to scramble warship crew to battle positions, was played at Philip’s request. The catafalque, last used for George VI’s funeral in 1952, sank slowly through the chapel floor to the royal vault below, transported on a lift installed by George III.