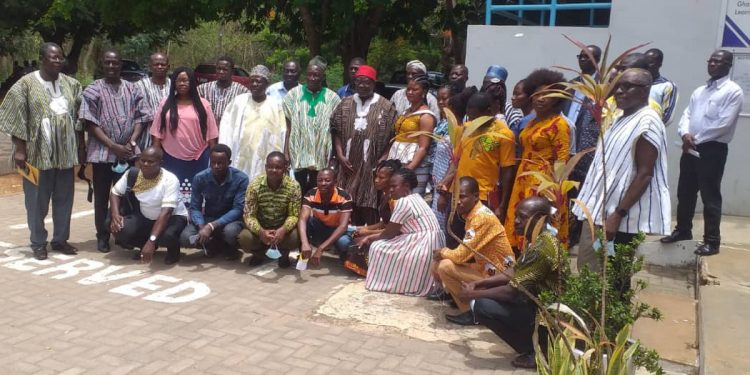 A number of language curriculum specialists in Bolgatanga are undertaking a two-week intensive workshop on how to develop materials for the study of the Gurene (Frafra) language.

Following the approval of Gurene late last year by the Ministry of Education as one of the approved Ghanaian languages, a two-week workshop to develop materials in Gurene based on the new standard based curriculum for teaching and learning opened on Monday, April 19, 2021, at the Accra College of Education, East Legon.

Mr. Vitus Azeem on behalf of the Bonaboto National President, Dr Andrews Akolaa, expressed his excitement about the workshop.

He added that Bonaboto over the years has been supporting the development of the language to ensure that it was part of the curriculum and is happy about the recent development.

He advised the participants to show commitment to the workshop to ensure the success of the workshop. He presented an amount of GHS7,500.00 as Bonaboto support for the workshop.

The Principal of Accra College of Education, Dr. Samuel A. Atintono, in his welcome address expressed his appreciation to the participants, Bonaboto, Tɛrabuuriyele, and the resource persons for their support and for making time to be present at the workshop.

Mr. Atintono as a language expert, and the coordinator of the workshop, appealed to the participants to ensure that they produce quality materials for teaching and learning in the language.

He further expressed his appreciation to government for the approval of the language and said that there is a window of hope for the learners of the language in the Bonaboto area to improve learning outcomes at the basic level.

Speaking on the history of the development of the language, Prof Avea E. Nsoh said that the efforts to develop the language started in the 1920s with one Anthropologist, Captain Rattrary followed by the Catholic Church in the 70s. Notable among them is the late Armand Father Libel who collected folktales which were later transcribed and formed the basis of the oral literature.

Personalties and organizations who have supported the development of the language include GILLBT, Prof Mary Esther Dakubu, Prof. Avea and his students at the University of Education, Winneba in the early 90s till date.

He, however, lamented that efforts over the years to get the approval for the language into the school curriculum were never successful except at the Colleges of Education in 2002.

He is, therefore, happy that at long last approval has been granted. He expressed his appreciation to Bonaboto, Tɛrabuuriyele and all those who supported the development of Gurene to achieve this feat.

He thanked the Principal of Accra College of Education and his Management for accepting to host the workshop. He further thanked the Government for the approval and urged the participants to work hard to produce excellent materials.

Terabuuriyele organization which was led by the Farefari Chief of Accra, expressed their excitement about the workshop and said that they were happy that their fight for the inclusion of Gurene in the school curriculum has come to fruition and pledged their support for the workshop.

Two representatives from NaCCA admonished the participants to ensure that they develop high-quality materials that follow the standard-based curriculum for the appropriate grades or levels.