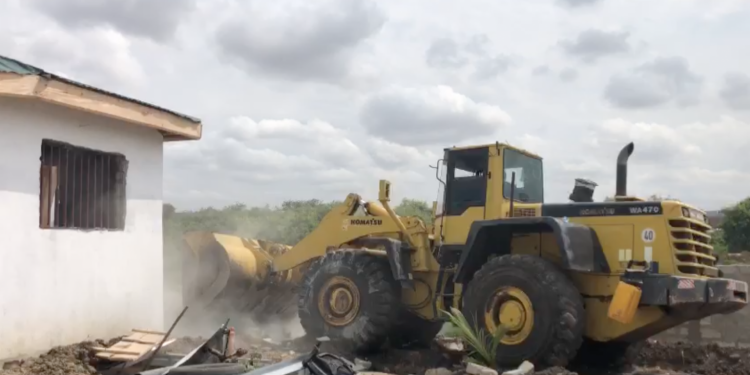 The Tema West Municipal Assembly in the Greater Accra Region says it will not back down in ensuring that structures erected on waterways and Ramsar sites at Lashibi in Accra are demolished.

The Assembly gave the assurance after its equipment that was being used to demolish some structures mounted on waterways broke down in the process on Tuesday, April 27, 2021.

The Municipal Chief Executive for Tema West, Adwoa Amoako in a Citi News interview said the Assembly will make sure owners of buildings without permits also bear the cost for the demolition.

According to her, they will suffer for their actions.

“We are trying as much as possible to advise everybody who has built on waterways to make sure he or she demolishes the structure by himself or herself because we will go to the Ramsar site and those who just site containers anyhow and people who just put their buildings without a permit are going to suffer.”

The Tema West Municipal Assembly on Tuesday started the demolition of structures erected on waterways at Lashibi.

The exercise followed a directive issued by the Greater Accra Regional Minister, Henry Quartey, to the Assembly weeks ago during a visit to the site.

The move is to help reduce the perennial flooding in the area.