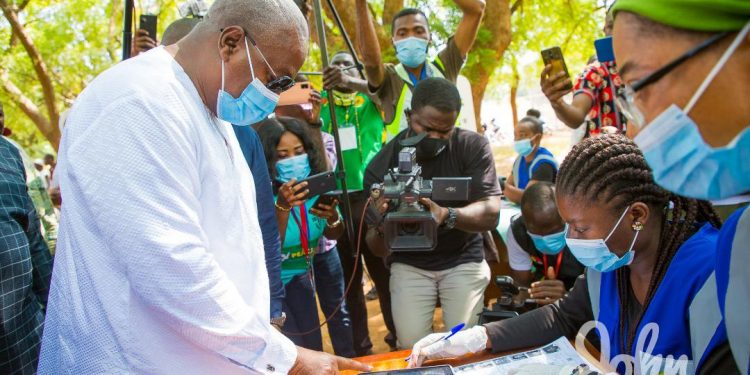 The 2020 presidential candidate of the opposition National Democratic Congress, John Dramani Mahama has indicated that the party will deploy professionals and more educated personnel to monitor the 2024 elections at various levels.

According to him, a lot more expertise is required in many parts of the electoral process, such as the collation of election results.

The former president said this will enable the party to police and monitor the polls in order to ensure the process is free and fair.

Speaking at the annual conference of the party’s Professional Forum in Accra, Mr. Mahama called on members of the forum to make themselves available for the 2024 general elections.

“We must ensure that we have more professionals and more educated people coming into play in respect of policing and monitoring the elections at the grassroots level. Collation of results is an important activity that the expertise that you people carry can help with, in terms of collating the party’s results in good time and also transmitting the results as most of you do in your professional work with information technology.”

Mr. Mahama took on the Electoral Commission (EC) and its Chairperson, Madam Jean Adukwei Mensa, for what he described as “voter fraud and irregularities” in the 2020 polls.

He filed a petition at the Supreme Court to challenge the outcome of the presidential elections.

The apex court however ruled in favour of the EC and President Akufo-Addo.

Mr. Mahama subsequently registered his disagreement with the final judgment of the Supreme Court.

Among other things, John Mahama expressed regret that the Chairperson of the Electoral Commission did not testify in court despite his applications for her to be interrogated in court.

He said the conduct of the court and the counsel for the Electoral Commission aided Jean Mensa to evade “accountability” for her work in the 2020 polls.

“I believe that the law should not be an instrument for partisan purposes. I also believe that the rule of law should mean that one rule for all… The 2021 election petition will go down in history as the profound moment when the Chairperson of the EC opted to evade public scrutiny… Everything was done in this trial to prevent the Commission from accounting to the people in whose name they hold office,” he added.

According to Mahama, that singular act of Jean Mensa not testifying in court is a betrayal of the principles of transparency and accountability to Ghanaians.

“This is a clear stab in the heart of transparency and accountability to the sovereign people of Ghana.”

FDA must examine next batch of COVID-19 vaccines – GMA

FDA must examine next batch of COVID-19 vaccines - GMA