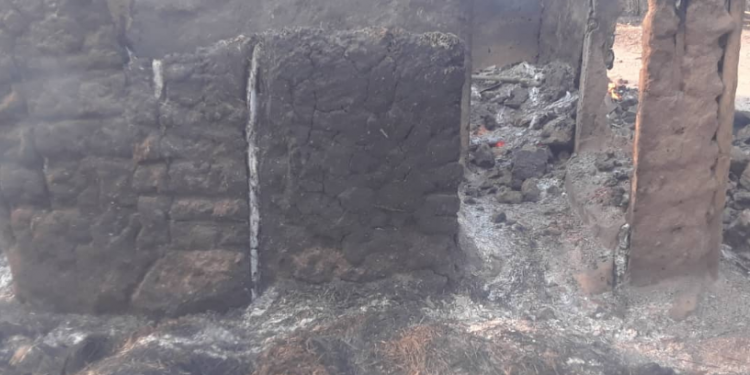 Some irate youth of Nakpali in the Zabzugu District of the Northern Region on Tuesday, April 20, 2021, destroyed the property of a 68-year-old woman they accused of being a witch.

The youth also torched the house of Amina Mahama, whom they accused of causing a baobab tree to fall and kill a young man in the town.

Reports indicate that on Saturday evening, some youth were sleeping under a Baobab tree in the town because the weather was warm.

At about 9 pm, the baobab tree allegedly fell on them, killing one person instantly and injuring two others.

According to the youth, there was no wind, or any sign of rain, before the incident occurred.

They thus accused the woman, whose house was just a few metres away, of being behind the incident.

On Tuesday afternoon, the youth besieged her premises but luckily, she was not at home when they got there.

They however burnt down the whole house and her other possessions.

“The lady was behind the incident. We’ve suspected her of being a witch for a long time. This one, there was no wind, no sign of rain and all of a sudden the tree fell,” one of the angry youth said.

Police in Zabzugu had to intervene to stop further destruction of Amina’s belongings.

Meanwhile, the police say they are currently investigating the incident and are searching for the perpetrators.

This comes months after the lynching of a 90-year-old woman, Akua Denteh, at Kafaba in the Savannah Region in August 2020.

Akua Denteh was lynched by the townsfolk after she was accused of being a witch.

At least 14 persons are currently standing trial over the killing of Akua Denteh.

Show us blueprint for Airteltigo takeover – Franklin Cudjoe to government