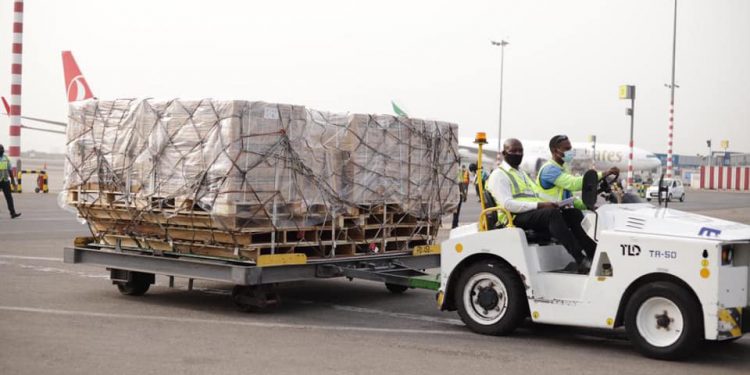 Ghana is expected to take delivery of 350,000 doses of AstraZeneca vaccine from the COVAX facility later today, Tuesday, May 4, 2021.

According to President Akufo-Addo, the move forms part of the government’s agenda to vaccinate Ghana’s entire adult population by the end of the year.

The president, who made the announcement during the celebration of May Day in Accra on Saturday, also said an additional 1.3 million vaccines of the Sputnik V vaccine will arrive in the country by May 15.

“We are receiving 350,000 more AstraZeneca vaccines from the COVAX facility on Tuesday in addition to the first consignment of 600,000 that came to us on 24th of February. By 15th May, the government would have procured some 1.3 million Sputnik vaccines. We are determined to vaccinate some 20 million Ghanaians, that is the entire adult population by the end of this year, and we remain on course to achieve this goal,” he said.

The government has faced challenges in procuring additional vaccines to meet the initial eight-week window given to persons who received the first jab, to get their second dose.

Health authorities recently issued a communiqué postponing the second phase of vaccination exercise for persons who have taken the first jab.

So far, more than 800,000 people have received their first jabs of the AstraZeneca COVID-19 vaccines, with the Greater Accra Region having the highest number of inoculated persons.

Government must speed up procurement of next batch of vaccines – Minority

The Minority in Parliament has asked the government to expedite the procurement of the second batch of COVID-19 vaccines for Ghanaians.

According to the group, the government has made very little attempt in securing the vaccines despite the budgetary allocation made for them.

Addressing the media, Ranking Member on the Health Committee in Parliament, Kwabena Mintah Akandoh said Ghanaians stand to lose their partial immunity against the disease with the delay in the second vaccination of the populace.

“We would like to call on the government to expedite the action on vaccines as earlier promised. Ghanaians were informed that the first dose of COVID-19 vaccines will provide a high level of protection for about eight weeks by which time another consignment would have arrived to ensure the administering of second jabs for those who had received their first jab.”

“As we speak, not an additional dose of the AstraZeneca vaccine has arrived, putting Ghanaians who have already received the first jab at risk of losing the partial immunity acquired through vaccination.”