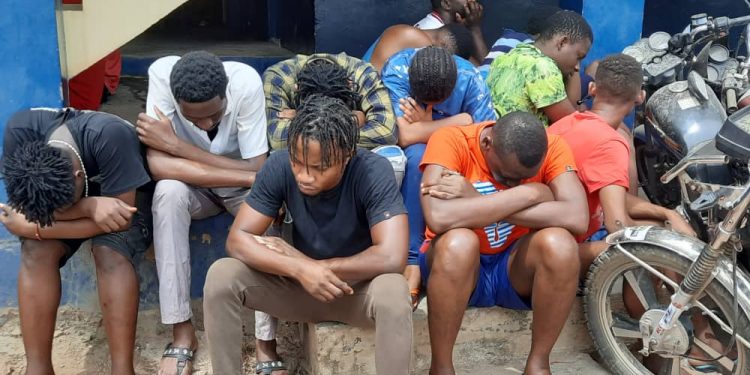 Some 70 suspected fraudsters have been put before the Ofaakor Circuit court, presided over by His Honour Ebenezer Osei Darko, on charges of engaging in electronic cyber fraud and entering Ghana without permit.

Their pleas were not taken when they appeared before the court last Friday.

They were remanded into police custody to reappear on Thursday, May 27, 2021.

The suspects are among the over 300 Nigerians who were arrested during a police swoop in and around Kasoa in the Central Region last week.

The suspected criminals, including five women, were arrested in a special operation dubbed “Operation Storm Kasoa”.

The operation, according to the police, is to clamp down on criminal activities in Kasoa and its environs.

The suspects were arrested in areas such as Budumburam camp, Kasoa CP, Adade, Akweley and Ofaakor.

Over 245 laptops, 142 assorted mobile phones and six Nigerian passports were retrieved from the suspects during the operation.

The Central Regional Police Commander, DCOP Mrs. Habiba Twumasi Sarpong indicated that the swoop was part of activities to rid Kasoa of criminals.

“We arrested 340 suspects, most of them being Nigerians including five females. Nine of the suspects were found with substances suspected to be Indian hemp. A total of 245 laptops, 142 assorted mobile phones and 6 Nigerian passports were retrieved from the suspects during the operation…The public’s cooperation is much needed. They should share information with the police. We say if you see something, say something,” she stated at a press conference after the police swoop.

Vaccine lag is putting millions of lives at risk’

Vaccine lag is putting millions of lives at risk'