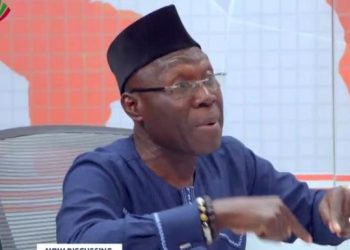 A former Member of Parliament for Tamale South, Inusah Fuseini, has condemned the President, Nana Akufo-Addo for justifying the burning of excavators and other mining equipment by members of the government’s ‘Operation Halt’ team.

President Akufo-Addo, on Wednesday, May 26, 2021, asked persons who are dissatisfied with the government’s approach in dealing with the ‘galamsey’ menace, particularly the burning of excavators and other mining equipment, to “go to court to vindicate their position.”

Reacting to this on Eyewitness News, the former Lands and Natural Resources Minister said he is disappointed by the President’s stance on the matter.

“When I heard the President, a celebrated lawyer, a human rights defender say those things, I was downhearted. He failed woefully to use the platform he was given to set the records straight that he stands by the law.”

“When the law clearly spells out how to deal with a problem and the procedure to follow in dealing with it, you are only required to follow the procedure as prescribed by law. You cannot treat the laws of the country with impunity and still claim to be President of this country, because you swore on January 7, 2021 to uphold, defend and preserve the constitution of the country. Article 11 of this constitution includes the Minerals and Mining Act, what you swore to defend, so how do you explain to Ghanaians your stance against the constitution?”

He maintains that the confiscation and burning of excavators is illegal.

“In the first place, the rule of law, which is an embodiment of the separation of powers doctrine, clearly frowns upon the vesting of executive and judicial powers in one person. That is why Lord Acton has said ‘power corrupts and absolute power corrupts absolutely.”

“So yes, the Executive has the power to seize the logistics, but it is not their responsibility to confiscate or burn without first going to court.  Burning is not even prescribed by our laws,” he argued.

What did Akufo-Addo say?

The President said he remains strongly opposed to the activity of illegal mining and the destruction of the country’s land, water, and forest resources, and will ensure that everything possible is done to stop such activities.

Speaking at a sod-cutting ceremony for the construction of a new school complex for the Ghana School of Law in Accra, Nana Akufo-Addo said the government will deal decisively with the menace of illegal mining without political, ethnic, or religious considerations.

“I know there are some who believe that the ongoing exercise of ridding our water bodies and forest zones of harmful equipment and machinery is unlawful and in some cases harsh. I strongly disagree, and I will advise those who take a contrary view to go to court to vindicate their position if they so wish. That is what the rule of law is all about,” Akufo-Addo said.

The Ghana Armed Forces have been deployed to various parts of the country to fight illegal small-scale mining affecting water bodies and forest reserves.

As part of its operations, the ‘Operation Halt’ taskforce has supervised the burning of various mining equipment including excavators and generators, but this activity has been widely condemned by some persons who believe the seized equipment could serve other useful purposes.

Some affected small-scale miners also claim they have documents backing their operations, and that they have been unfairly targeted; a situation that some fear could lead to the payment of judgement debts, should such persons choose to go to court.

But President Akufo-Addo disagrees with this position, insisting that any such contrary view should be argued out in court.