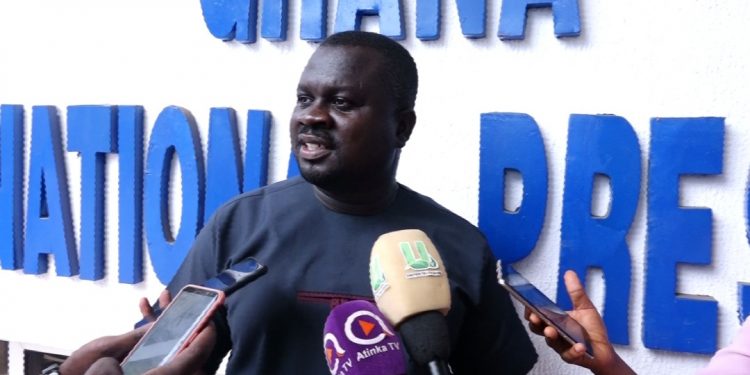 The current National Organising Secretary of the Ghana Journalists Association (GJA), Albert Kwabena Dwumfour, has filed his nomination to contest for the presidency of the association.

Mr. Dwumfuor, who is also the Head of Corporate Affairs at Tobinco Group of Companies assured to make the association a vibrant one should he win the position.

Speaking to the media after filing his nomination form, Mr. Dwumfuor said he will prioritize the welfare of journalists if he becomes the next GJA president.

“I stand for 3 key things – journalists’ lives first. The welfare of journalists is very key, and I’m coming in to change the status quo and let journalists feel comfortable,” Mr Dwumfour said.

He also promised to ensure that the security of journalists becomes a priority adding that “we need to take our private security as an utmost responsibility because we need to live to tell the story”.

“We will make sure we use all the means and the connections to bring all the stakeholders together to discuss this issue, so we don’t compromise our security,” he added.

Mr. Dwumfour gave the assurance that the professional development of journalists will be on his agenda adding that he would ensure quarterly workshops for journalists in order to build their capacity.

“Social media is taking over the media space. The world is evolving, so how does traditional media position themselves to meet the trend? All these things are going to be factored in the quarterly workshop”, the GJA Organizing Secretary stressed

While commending the current GJA leaders of which he is a member for their stewardship, he also called for the need for GJA to be made attractive for other media personalities to join.

He, therefore, promised to rebrand the association using his charisma, exuberance, ingenuity, and resourcefulness to achieve that goal.

“We must give the association a facelift. We need to have a vibrant GJA and I will make sure it happens. If I come, and I’m not able to do it I will resign “, the Head of Corporate Affairs of the Tobinco Group assured.

Bright Simons appointed to Salzburg Global’s Board of Directors

Bright Simons appointed to Salzburg Global’s Board of Directors