Destruction caused by ‘galamsey’ a monumental crime; it shouldn’t be condoned – Akufo-Addo 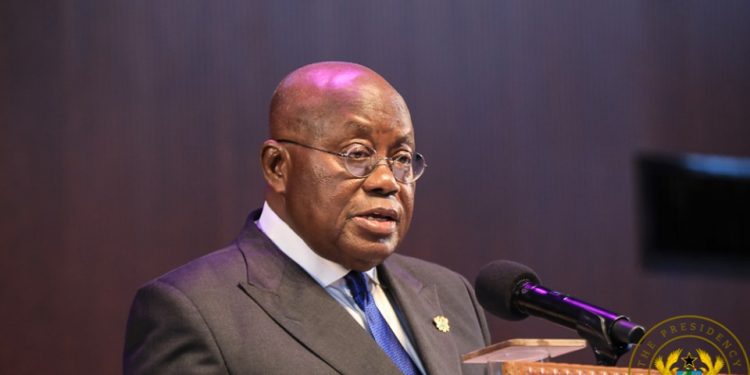 The President, Nana Addo Dankwa Akufo-Addo, has said persons who engage in illegal mining activities that destroy water bodies and forest reserves, “commit a monumental crime” against the state.

President Akufo-Addo insists that the menace should not be condoned by the society in any shape or form.

The Commander-In-Chief of the Ghana Armed Forces was speaking at a sod-cutting ceremony for the construction of a new school complex for the Ghana School of Law in Accra on Wednesday, May 26, 2021.

President Akufo-Addo thus assured the citizenry that the government will not renege on its renewed commitment against the menace.

This he says will be done decisively without political, ethnic, or religious considerations.

“Apart from the criminal violations of Act 703, the activities of such persons desecrate our environment, pollutes our water bodies, and endangers the lives of present and future generations of Ghanaians.”

“These are monumental crimes that should not be condoned in any shape or form. The devastation caused by this equipment is nothing short of evil, and we should not compromise in our efforts to protect our environment, forest reserves and water bodies,” Akufo-Addo said.

Meanwhile, he has also asked persons who are dissatisfied with the seizure and burning of their excavators and other mining equipment by members of the government’s ‘Operation Halt’ team to seek legal redress.

According to him, that is what rule of law is all about.

“I know there are some who believe that the ongoing exercise of ridding our water bodies and forest zones of harmful equipment and machinery is unlawful and in some cases harsh.”

“I strongly disagree, and I will advise those who take a contrary view to go to court to vindicate their position if they so wish. That is what the rule of law is all about,” Akufo-Addo added.

About the seizure and burning mining equipment

The Ghana Armed Forces has been deployed to various parts of the country to fight illegal small-scale mining affecting water bodies and forest reserves.

As part of their operations, the ‘Operation Halt’ taskforce has supervised the burning of various mining equipment including excavators and generators, but this activity has been widely condemned by some persons who believe the seized equipment could serve other useful purposes.

Some affected small-scale miners also claim they have documents backing their operations, and that they have been unfairly targeted; a situation that some fear could lead to the payment of judgement debts should such persons choose to go to court.