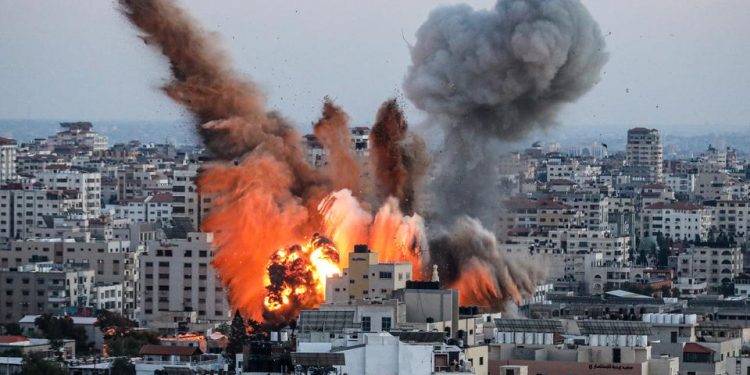 The first convoys of humanitarian aid have arrived in Gaza, hours after a ceasefire between Israel and Palestinian militants came into effect.

Thousands of Palestinians returned home to scenes of devastation, with officials saying reconstruction might take years.

The World Health Organization (WHO) called for the creation of corridors for injured people to be evacuated.

More than 250 people were killed in the 11-day conflict, most of them in Gaza. Both Israel and Hamas claimed victory.

In southern Israel, residents celebrated the truce, but many expressed concern that another conflict in the region was just a matter of time.

Trucks from various aid agencies, including those affiliated with the United Nations, started bringing much-needed medicine, food and fuel into Gaza, after Israel reopened the Kerem Shalom crossing.

More than 100,000 people had to flee their homes in the territory, which is controlled by the militant group Hamas, and nearly 800,000 people did not have access to piped water, the UN children’s agency UNICEF said.

Palestinian officials say tens of millions of dollars will be needed to rebuild the already impoverished enclave that is also suffering from Covid-19.

Margaret Harris, a spokeswoman for the WHO, called for immediate access for health supplies and personnel, saying the territory’s health facilities risked being overwhelmed by thousands of injuries.

For years, Gaza has been subjected to Israeli and Egyptian restrictions on the passage of people and goods, with both countries citing concerns about weapons reaching Hamas.

The UN agency for Palestinian refugees (Unwra) said its priority was to identify and help tens of thousands of displaced people, and that it was urgently seeking $38m (£26m) in aid.

On Thursday, Gaza’s housing ministry said 1,800 housing units were unfit for living and 1,000 had been destroyed.

“The damage inflicted in less than two weeks will take years, if not decades, to rebuild,” said Fabrizio Carboni, the Middle East director for the International Committee of the Red Cross (ICRC).

Samira Abdallah Nasser, said her two-storey house near Beit Hanoun was hit by a blast during the fighting, reducing it to ruins.

The fighting between Israel and Palestinian militants in Gaza began on 10 May after weeks of rising Israeli-Palestinian tension that culminated in clashes at al-Aqsa, a holy site revered by both Muslims and Jews, in occupied East Jerusalem.

At least 248 people, including more than 100 women and children, were killed in Gaza, according to its health ministry. Israel has said it killed at least 225 militants during the fighting. Hamas has not given casualty figures for fighters.

In Israel 13 people, including two children and an Israeli soldier, were killed, its medical service says.

Many Jewish families emerged from bomb shelters. Emergency restrictions have been lifted while all schools are due to reopen on Sunday.

The Israeli army said militants fired more than 4,300 rockets during the conflict, of which 90% were intercepted by its air defences. But rockets still got through, slamming into homes, synagogues and other buildings.

Many of those rockets were fired at cities in southern Israel, such as Ashkelon, where Tammy Zamir told Reuters she was happy the conflict was over but was “certain there will be another escalation”.

In the nearby city of Ashdod, 25-year-old Dan Kiri said Israel should continue attacking Hamas until it collapsed, adding: “It’s only a matter of time until the next operation in Gaza”.

The ceasefire was tested by clashes at the al-Aqsa compound after Friday prayers. Israeli police fired stun grenades at Palestinian demonstrators, who threw rocks and petrol bombs at officers. At least 20 Palestinians were injured, medics said.

Meanwhile, US President Joe Biden said a two-state solution was the only way to resolve the conflict, adding that there could be no peace unless the region unequivocally recognised the right of Israel to exist. He also said the US would organise international help to rebuild the damage in Gaza.