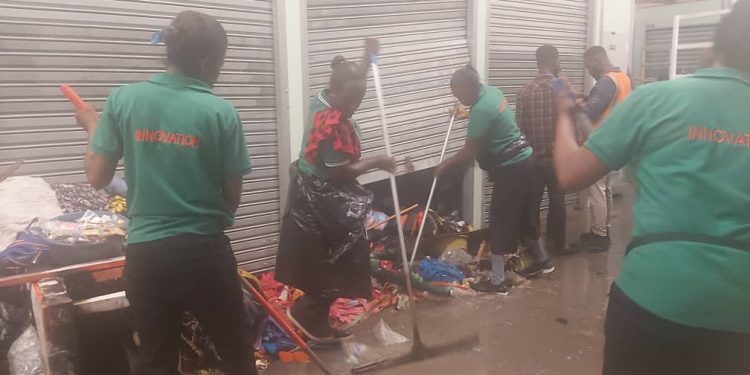 A quick response by officers of the Ghana National Fire Service (GNFS), prevented a fire outbreak at the new Kejetia Market from escalating.

One shop was affected as firefighters ensured the fire did not spread to other areas.

Fire officers say the cause of the fire is not yet known.

Following the incident, the Mayor of the Kumasi Metropolitan Assembly, Osei Assibey Antwi, has given a directive for all traders not to operate in the market on Wednesday, May 12, 2021, until after 11:00am to allow fire officers ample space to undertake investigations.

“In view of the fire incident that took place on Tuesday evening, management has decided that on Wednesday, we are opening the place at 11:00 am. This will give the Fire Service personnel the opportunity to inspect all their hydrants. You know this is an automatic system and even though one shop triggered the fire, around that one shop, a lot of the sprinklers were opened to quench the fire automatically. So they have to inspect all that which were opened”.

The Chairman of the Federation of Kumasi Traders, Nana Prempeh, said they welcome the directive and are willing to comply.

“Well, we take it in good faith, although it has come at a time most of our people are in their houses. As the information went out, the majority of the traders, particularly, those who are in their houses were very apprehensive, but as we all know, the situation is calm now. The information the security personnel, the fire service, and management are giving us is that they have to do a reassessment tomorrow [Thursday] morning. They will communicate to us afterwardS and open the market”.