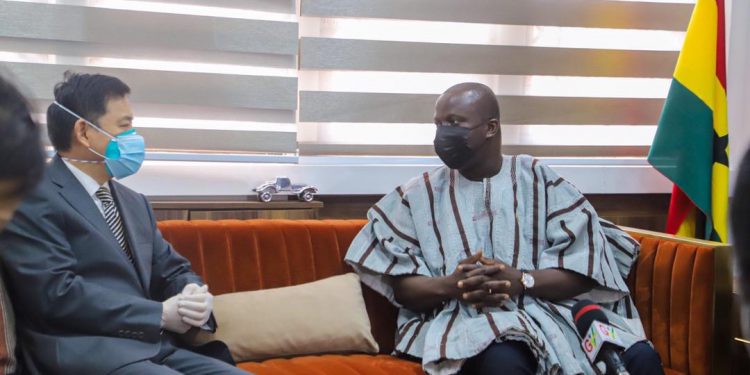 Ghana’s Minister of Lands and Natural Resources, Samuel Abudulai Jinapor, has called for a closer partnership between Ghana and China to curb illegal mining activities in the country.

He said there was an urgent need for the two countries to work closely together to efficiently regulate Ghana’s small-scale mining sector.

The Minister said this when the Chinese Ambassador to Ghana, H.E Lu Kun, called on him in Accra on Friday, May 21, 2021.

Mr. Jinapor indicated that the Ghanaian government will continue to work with the Chinese side for greater development for their respective citizens.

On his part, H.E Lu Kun mentioned that China was an important partner for Ghana, adding that the bilateral cooperation between the two countries is leading to a sound momentum of growth.

The relationship between Ghana and China has improved since they established diplomatic ties 60 years ago.

It also directed the Minerals Commission to desist from processing or granting any request for the renewal of prospecting licenses in forests.

Currently, the Ghana Armed Forces has commenced the second phase of ‘Operation Halt II’, which is aimed at “removing all persons and logistics involved in mining on water bodies”.

The operation is being undertaken by over 400 men of all ranks after an initial deployment of 200.