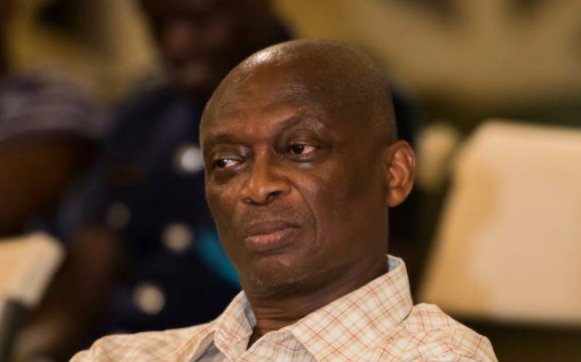 Veteran journalist, Abdul Malik Kwaku Baako Jnr. is worried that the National Security is unable to provide details of the specific crimes alleged to have been committed by the embattled Ashanti Regional National Security Coordinator, Deputy Commissioner of Police (DCOP) Kwaku Ayesu Opare-Addo.

Mr. Baako believes, “it is a serious matter to level criminality against a former regional national security liaison officer”.

The beleaguered DCOP Opare-Addo was hounded out of office by national security operatives; a development he has condemned.

It later emerged that he was forcefully relieved of his duties because his tenure had expired, and over claims of non-performance and criminality according to the acting National Security Head.

Although DCOP Opare-Addo has denied the accusations against him, it is still unclear what wrongdoing he has engaged in.

Speaking on Newsfile on Accra-based Joy FM, Mr. Baako, also the Editor-In-Chief of the New Crusading Guide Newspaper, suggested that, although the allegations may be genuine, it will only be appropriate, if the claims are made public for a better appreciation of the issue.

“I wish that the [allegations] had not been said because it raises legitimate questions. If there is a record of the complicity of Mr. Opare Addo in criminal activity, at what point in time was that seen or uncovered? And after that, what has been the action taken relative to him?” Or that is why his appointment is being terminated, then give further and better particulars of the alleged crime that he is involved in”, he said.

The National Security Coordinator, Major General Francis Adu Amanfo (rtd), had said that DCOP Opare-Addo’s tenure in office had expired, but his mandate was not renewed due to “non-performance and his own criminal activities”.

Without giving further details about the supposed criminality, the National Security boss justified the forceful removal of DCOP Opare -Addo maintaining that it was as a result of his refusal to hand over his duties to a newly appointed person for that office.

However, in a statement issued on Wednesday, May 19, 2021, DCOP Opare-Addo said those claims against him were preposterous and a deliberate ploy to taint his personal and professional image.

“Ordinarily, I would not have responded to such accusations, but I find the comments by Major-General Adu Amanfo distastefully unprofessional and a direct attack on my unblemished professional career spanning over three decades in the Ghana Education Service and the Ghana Police Service.”

Commenting on accusations that he had a pile of criminal records that have been subjected to scrutiny, DCOP Opare -Addo indicated that “alleged criminal activities are completely false and a figment of his imagination.”

For him, his work experience has been achieved on the basis of professionalism and integrity without any iota of criminality and non-performance.

“I have always exhibited high professional standards in my work and my record in the various capacities is there for all to see.”

“With over two decades of service as a senior police officer in the Ghana Police Service, there was not a single allegation against my hard-earned reputation, and for this reason, I find the comments made by the Acting National Security Coordinator as a misrepresentation of facts and unfortunate cultivated lies by an Officer of the ilk of a retired Major-General,” he said.