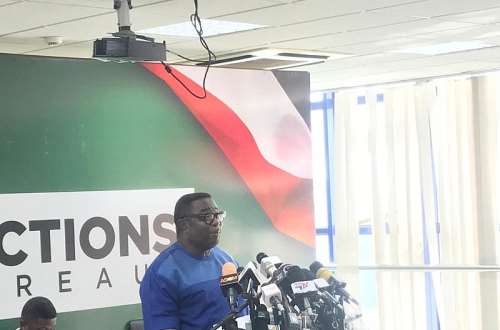 He maintains the party’s decision is not only unsustainable, but also wrong-headed.

“It’s an exercise in futility. That decision is wrong-headed. It has no sustainable effect. They cannot sustain it”, he said on Newsfile.

Mr. Baako’s assertions follow the NDC’s move to propose its own electoral reforms after the rejection of the Electoral Commission’s proposals at a recent post-election 2020 IPAC review workshop.

The largest opposition party which has boycotted  all IPAC meetings after the 2020 election, has said it does not agree with the EC’s resolutions because they will lead to serious electoral challenges.

However, the veteran journalist made reference to minutes of a 1995 IPAC meeting where the NDC reversed its decision after boycotting the Committee’s sittings, and predicted a similar u-turn in the days ahead.

“There are precedents for that…I can see in my mind’s eye, they reviewing that decision and going to IPAC, they have done it before in 1995.”

“You will be amazed that at the end of the day, they are able to work together, and I am saying the same thing is going to happen”, Mr. Baako added.

IPAC has made 16 resolutions aimed at improving subsequent elections in the country.

These resolutions include the change of the closing of polls from 5:00 pm to 3:00 pm.

It also agreed that the voter registration exercise is made all year-round for persons who are eligible to vote to register.

But Elvis Afriyie Ankrah, the Director of Elections of the NDC, has said these plans are mind-boggling.

Concerning the review of the time for closing the polls, he said, “NDC finds the proposal by the Jean Mensah-led EC to change the closing time of polls from 5:00 pm to 3:00 pm in 2024 baffling.

On having an all-round voter registration exercise, Elvis Afriyie Ankrah said it will be untenable to have political party agents stationed at the various EC offices all the time to monitor the registration of new voters.