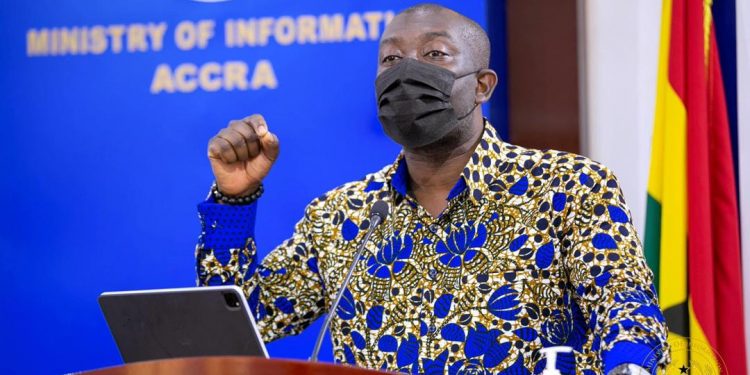 The Minister for Information, Kojo Oppong Nkrumah, has discredited concerns by a section of the public, that the President mischaracterized discussions of the challenges of the Free Senior High School program as a campaign against the policy by Accra-based Joy FM.

The President, Nana Akufo-Addo, during a special congregation over the weekend, at the University of Cape Coast where he was honoured with a doctorate degree for his policies in education, slammed critics who accuse his administration of perpetrating a culture of silence.

“Nana Addo made the comments as a point that we are not in disagreement on the benefit or importance of this, and he is pleased that it has been recognized as such, albeit that to explore ways to make it better. He goes on to make the point that, however, it is obvious that there are some persons who essentially seek to run it down.”

“He is of the view that what needs to take place is an open and frank conversation, and what can be done to make it better. So if someone disagrees with his characterization, of what some persons are doing as a campaign against it, it is well within the right of that person to disagree”, the Information Minister said.

President Akufo-Addo defended the success story of the Free SHS policy while dismissing the discussions as a campaign against it.

He however said his government would be in its right to challenge the assertions made by journalists or media houses.

Executive Secretary of Africa Education Watch, Kofi Asare, who is one of the proponents of the need for a review of the program, told Citi News the President got it wrong.

“If the President says that teachers who are teaching in the schools have no legitimate concerns about the policy, then I think it’s unfortunate. So far as we are concerned, we haven’t raised issues about quality or access.”

“Issues we are raising relating to operational dynamics of the program and how financial inefficiencies are depriving basic education of the needed resources to improve same. We just need to take a second look at the operational dynamics of the policy because if it is not efficient. What happens is that, it constricts basic education“,  Kofi Asare said.

The Media Foundation for West Africa (MFWA) has also criticized the President for saying a discussion on the challenges facing the Free Senior High School (SHS) policy, is a campaign against the policy.

While reacting to the President’s position on the growing concern of “culture of silence”, Executive Director of the Media Foundation for West Africa, Sulemana Briamah said the President’s comment was disturbing as it did not encourage media houses to freely discuss government policy.

“If a media house is discussing a policy initiative of the government and the President says that amounts to a waging a campaign against the policy, what then happens is that, other media houses are going to be silent, those who wouldn’t be silent may have to embrace the policy and find voices of support and endorsement and chorus of praise singing. I think this doesn’t help especially when it comes from no less a person than the President himself. I think, this is unfortunate.”