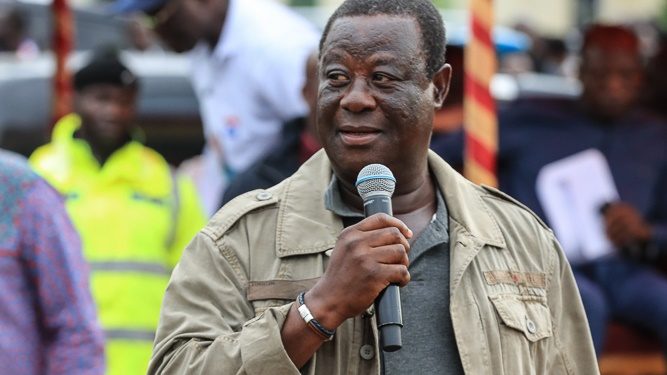 The four-tier Pokuase interchange in the Greater Accra Region, is expected to be fully completed and commissioned by the second week of July 2021.

That’s according to the Minister of Roads and Highways, Kwesi Amoako Atta.

In a Citi News interview on Monday, May 10, 2021, the sector minister indicated that the project is currently 98% complete.

According to him, by the set date, all other touches needed would have been done for the commissioning of the project.

“The Pokuase interchange has reached about 98 percent completion and at that percentage technically, it can be described as potential completion, and we hope that we will finish everything in less than two months.”

“So by the end of June to mid-July, that project will officially be commissioned because, at that time, we would have attained full completion.”

The President, Nana Addo Dankwa Akufo-Addo, on November 25, 2020, commissioned phase one of the project as part of his two-day tour of the Greater Accra Region.

President Akufo-Addo, at the ceremony, opened to traffic tier-three of the interchange, which is the road from Awoshie to Accra, as well as the road from Kumasi to Awoshie.

About the Pokuase Interchange project

The $94 million project is expected to ease traffic congestion, improve urban mobility, and benefit agro-industries located within the project zone.

The government is jointly funding the project with the African Development Bank.

The project is being undertaken by Zhongmei Engineering Group Limited, with Messrs Associated Consultants Limited (ACON) and the Bigen Group.