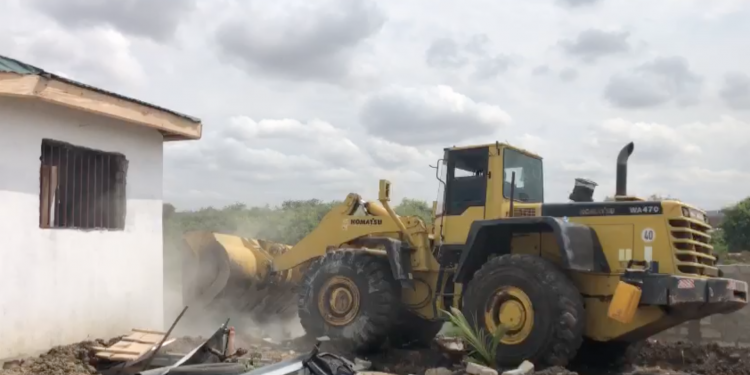 Some structures, including the building of an assembly member, have been pulled down by the Tema West Municipal Assembly for being sited on waterways at Lashibi in Accra.

This follows an initial demolition exercise carried out in the area to pave way for the free flow of water whenever it rains.

Greater Accra Regional Minister, Henry Quartey who spoke to journalists during the demolition said he would not shield any wrongdoing in his quest to protect the region.

“As part of the ‘Let’s Make Accra Work’ project, we are trying to bring back the discipline that has been lost in the region. We noticed that a washing bay has been built on a waterway. So I asked NADMO to work closely with the Assembly to ensure that unauthorized buildings are demolished.”

In the meantime, the Assembly Member for the Lashibi Electoral Area, Shaibu Kabore has expressed remorse for wrongfully erecting a building on a waterway.

“I know what I did was wrong, and I accept it as fate and I am willing to let it go. I have not received any compensation, I also apologize to the Assembly”.

The Tema West Municipal Assembly on Tuesday started the demolition of structures erected on waterways at Lashibi.

The exercise followed a directive issued by the Greater Accra Regional Minister, Henry Quartey, to the Assembly weeks ago during a visit to the site.

The move is to help reduce the perennial flooding in the area.