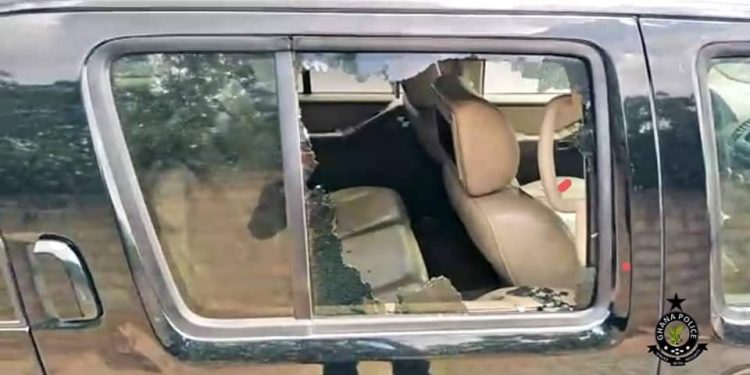 The Achimota School District Police Command has arrested 43-year-old Richard Bokor for attempted robbery on the GIMPA road in Accra.

According to police, the suspect smashed the side glass of a vehicle in an attempt to rob its occupant.

This arrest brings to four, the number of suspected robbers arrested on the stretch in one week, following several complaints of robbery attacks by users of the road.

“Over the weekend, the Regional Police through its patrol arrested three suspects who were on a motorbike with some substances suspected to be Indian hemp. Just this [Friday] afternoon, another motorist was also attacked, and his car was smashed with a stone and that is the suspect we just arrested.”

The Ghana Police Service has advised robbery victims to formally file complaints on their experiences to the nearest police station.

The Service says this will aid in investigations and possible arrest and prosecution of suspected criminals.

The advice by the Police follows a series of reported cases of robberies along major roads in parts of Accra, some of which are only publicised on social media without any report to the Police.

In a statement, the police administration particularly mentioned robbery hotspots including the GIMPA-Legon bypass.

Victims are being urged to report to the Legon, Achimota or Airport police station in such unfortunate cases.

“Steps have been taken to prevent a repetition of such or similar occurrences, however, the Police are appealing to the victim to lodge a complaint with the Legon Police Station, Achimota Police Station, Airport Police Station (whichever is closer to the place of incidence) or the Accra Central Police Station to aid investigations.”

“The appeal is also extended to any person who may have been attacked on the GIMPA road to report to us”, the statement added.

However, the Service noted that none of these alleged crimes have been reported at any police station, despite the number of incidents reported on both traditional and social media, saying “the police are yet to have any record of a complaint from a victim or witness of an attack of whatever form on the road other than social media rumors or claims.”

“It is important for citizens to report incidents of crime to the Police for an investigation to be carried and perpetrators to be arrested and kept from committing the same offence again”, the release concluded.