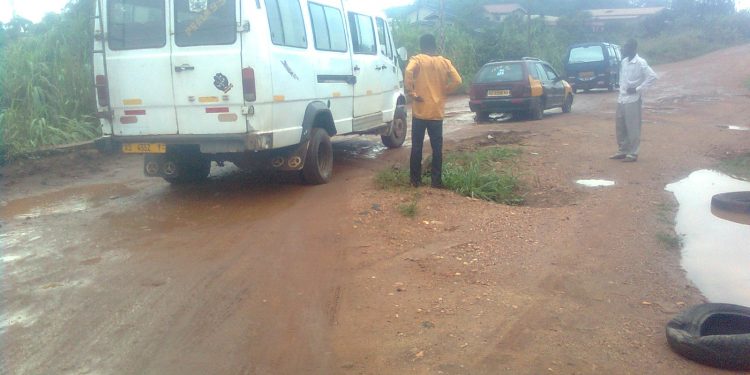 Some residents of Atwima Takyiman in the Atwima Kwanwoma District of the Ashanti Region are calling on the government to fix their deplorable roads.

According to the residents, despite being loyal to the governing New Patriotic Party (NPP), they are yet to see the benefits of their loyalty.

The residents blocked the Kwadaso-Foase and Twedie road on Tuesday, June 22, 2021, as a way of expressing their anger to the government over the poor road network in the area.

While demonstrating over the issue, they in the process left scores of drivers and other commuters stranded.

The residents say contractors working on the road abandoned the project soon after the 2020 elections were over.

The residents who poured onto the streets in their numbers demanded a speedy completion of their road.

Speaking to Citi News, the residents led by the chiefs and opinion leaders in the area stated that they have been following the NPP for a long time, and they need the government to fix their road.

“I am the chairman for NPP in one of the polling stations in this area, but it seems we have not benefitted from the votes that we have been giving to the NPP government since 1992. Yesterday, the president went to speak at Bolgatanga where the NPP’s hasn’t done well in terms of votes and promised to construct their road from Bolga to Bawku.”

“We are here demonstrating to the government that if they don’t do anything about this road, come 2024, for the first time, Atwima Kwanwoma will vote against the NPP government. So I want to convey the message through Citi News to government that if they don’t help us construct this road the ‘Breaking the eight’ they keep talking about won’t happen and for the first time we will vote against the government.”

“In 2020, when they were contesting for the election, the President came to Kumasi and the Minister for Roads promised that this road was going to be constructed, but where is it? We haven’t seen anything, and we are very disappointed in our own government,” he added.

One of the stranded commuters complained about how the demonstration was affecting her movement.

“I dropped my kids at school and on my way back all the roads were blocked. They are saying they are demonstrating, but I don’t know any other way to get home and one of my children is very sick at home and I need to get medicine or take him to the hospital.”

She also expressed worry over the state of the road and asked governemnt to do something about it.

Benefits of AfCFTA won’t be automatic; we must work for it – Chamber of Commerce CEO

Benefits of AfCFTA won't be automatic; we must work for it - Chamber of Commerce CEO