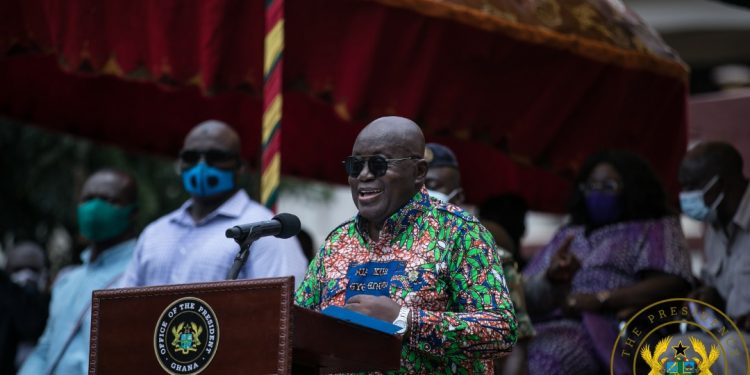 He said the factory would be constructed under the ‘One District, One Factory’ initiative.

“In the same way under the ‘One District, One Factory’ policy, we are going to establish, very soon, a guinea fowl processing factory here in Bawku,” he said.

President Akufo-Addo said this when he called on the Paramount Chief of the Kusaug Traditional Area, Zugraan Naba Asigri Abugrago Azoka II, as part of his day’s visit to the Upper East Region.

He said the ‘Planting for Food and Jobs’ programme was going on successfully in the area, and the distribution of fertilizers would soon begin for the farming season.

“Last year, although we targeted 47,761 farmers under the Planting for Food and Jobs programme, in the end, we registered 66,680 farmers, 20,000 more than were originally targeted are now under the programme.”

“Bawku Naba you can see how seriously the programme is unfolding, and on top of it too, the six warehouses in the Kusaug Traditional Area are being constructed and are 80 per cent complete,” he said.

He said the six warehouses under construction in the area, located at Kpalwega, Pusiga, Garu, Bugri, Binduri and Zebilla would enable farmers to store their produce, safeguard their incomes and strengthen agriculture and farming activities.

The President told the Bawku Naba that the PFJ programme was progressing steadily in the same way the six warehouses begun in the area, adding that in order for farmers to engage in all-year-round farming, over 40 dams were built in the Kusaug Traditional Area as part of the ‘One District, One Factory’ policy.

Naba Azoka II, on his part, congratulated President Akufo-Addo for his victory in the Presidential and Parliamentary elections in 2020, and thanked him for appointing some sons and daughters of the area in his government.

He said livestock farming appeared favourable to people in the Traditional Area, and that the autonomy granted the Clement Kubindiwo (C K) Tedam University of Technology and Applied Sciences at Navrongo in the Kassena-Nankana Municipality would increase their fortunes in the Agricultural sector.

He said the Traditional Council would soon collaborate with the University to explore the feasibility of requesting a satellite campus at Manga Research Centre that would focus on Agriculture, especially livestock production.

President Akufo-Addo was in the company of Mr. Dominic Nitiwul, the Minister of Defence, Mr. Ambrose Dery, Minister for the Interior, Mr. Stephen Yakubu, the Upper East Regional Minister, Mr. Abdulai Abanga, the Member of Parliament for the Binduri Constituency and former government appointees including; Mr Joseph Kofi Adda, Mr. Rockson Ayine Bukari and Mr. Frank Fuseini Adongo among others.