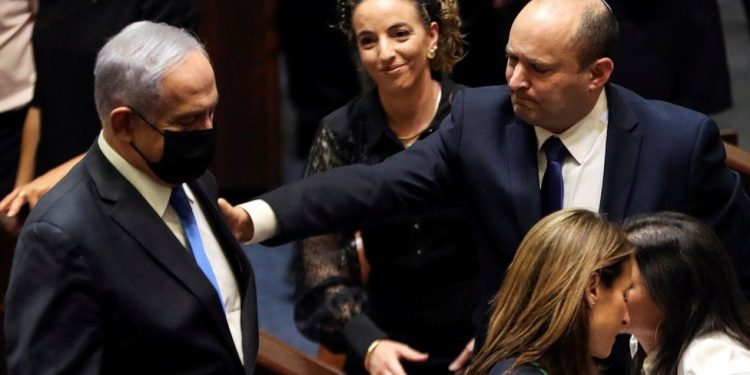 He said his government would “work for the sake of all the people”, adding that the priorities would be reforms in education, health and cutting red tape.

The right-wing nationalist will lead an unprecedented coalition of parties backed by MPs in a vote on Sunday.

He succeeds Benjamin Netanyahu, who was forced out of office after 12 years.

Mr Bennett, leader of Yamina party, will be prime minister until September 2023 as part of a power-sharing deal.

He will then hand power over to Yair Lapid, head of the centrist Yesh Atid party, for a further two years.

Mr Netanyahu – Israel’s longest-serving prime minister – will remain head of the right-wing Likud party and become leader of the opposition.

During Sunday’s debate in the Knesset (parliament) in Jerusalem, a defiant Mr Netanyahu promised: “We’ll be back.”

The new coalition was approved in a razor-thin vote of 60-59, with one abstention.

After the vote, Mr Netanyahu walked over to Mr Bennett and shook his hand.

In his speech, Mr Bennett, 49, said: “This is not a day of mourning. There is a change of government in a democracy. That’s it.

“We will do all we can so that no-one should have to feel afraid… And I say to those who intend to celebrate tonight, don’t dance on the pain of others. We are not enemies; we are one people.”

Representatives of the Palestinians have reacted dismissively to Israel’s new government.

“This is an internal Israeli affair. Our position has always been clear, what we want is a Palestinian state on the 1967 borders with Jerusalem as its capital,” a spokesman for Palestinian President Mahmoud Abbas said.

“It is an occupation and a colonial entity, which we should resist by force to get our rights back,” said a spokesman for Hamas, the Islamist group that controls Gaza.

US President Joe Biden sent his congratulations to Mr Bennett, saying he looked forward to strengthening the “close and enduring” bilateral relationship.

Ghanaian musicians lack respect for each other – Kwabena Kwabena

Ghanaian musicians lack respect for each other - Kwabena Kwabena