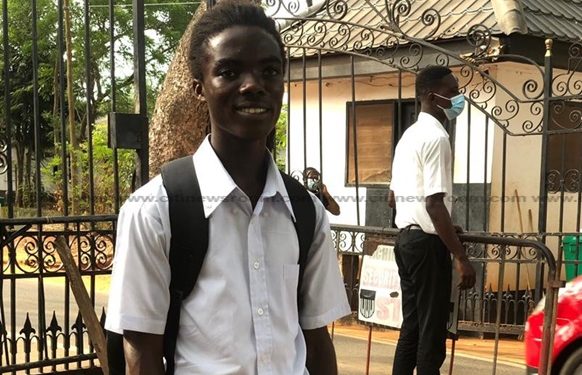 One of the dreadlocked students who was at the centre of the Achimota School-Rasta rigmarole, Tyrone Iras Marhguy has landed in his dream school.

He was finally admitted on Friday, June 4, 2021, after initial resistance from authorities of Achimota School despite a High Court judgment.

The student reported and concluded his admission procedures, and has been assigned his General Science class to begin academic studies.

In fact, he is partaking in an ongoing end-of-term examination being conducted in the school.

Tereo Mahguy, the father of Tyrone Marhguy, told Citi News‘ Nii Armah Ammah that he is satisfied with the admission processes.

“It really makes me feel good. I now have a totally different view. I am really overwhelmed because this was not what I was expecting. I thought everyone was going to take a bit of distance. But this wasn’t the case. Everyone was nice to us, and they received us warmly. So it was really a nice feeling”, he said.

Tyrone and his other counterpart, Oheneba Nkrabea dragged the school to court for denying them admission due to their dreadlocks which is in staunch practice to their Rastafari religion.

But a High Court ruling on the matter directed the school to admit the students.

Oheneba earlier enrolled in the school on Thursday after completing the admission process with his parents.

Despite their admission, the school’s Governing Board had stated early on that it will appeal the judgment of the High Court.

Students go to court; judge rules in their favour