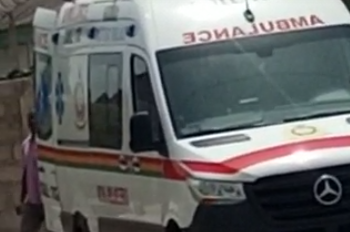 Service Ghana Autogroup Limited, the company from whose workshop an ambulance was taken out and used to cart cement from Kasoa, has accepted blame for the incident.

A video of the ambulance carting cement went viral early this week.

It immediately ignited public outrage amidst calls for sanctions of persons involved.

But in a statement signed by the company’s Managing Director, Dr. Christian Siaw-Missah, Service Ghana Autogroup Limited said police investigations have since commenced into the incident.

“We are taking the necessary steps to avert any such occurrences in future. We look forward to being able to serve you better in the future”, the company added in its statement.

In the statement, the company noted the following:

1. The vehicle in question developed a fault on the day of commission and has since been in our custody.

2. Since the vehicle had a gearbox problem which was under warranty, we had to wait until the gearbox was imported and fitted.

3. After repair works were completed on the 26th of  March 2021, a mandatory test drive was conducted from Mamprobi to Kasoa

4. It was during this test drive that the driver committed this dastardly act.

5. That Ghana National Ambulance Service is not to blame but rather Service Ghana Autogroup Limited.

6. We have since involved the police and investigations are ongoing

7. Finally, Service Ghana Autogroup Limited renders an unqualified apology to the National Ambulance Service and its staff, especially the drivers.