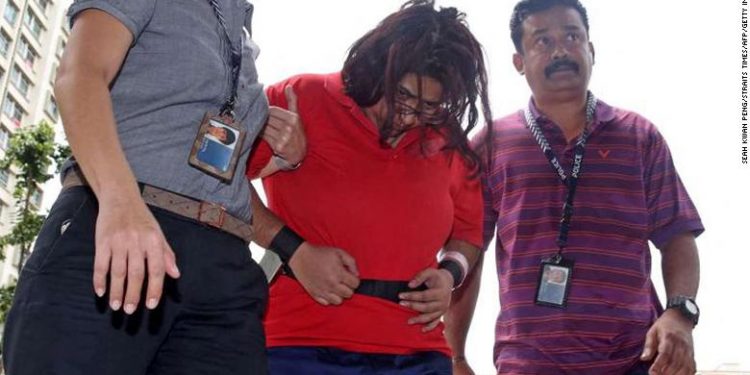 This photo provided by The Straits Times taken on August 3, 2016 and received by AFP on June 22, 2021 shows police officers escorting Gaiyathiri Murugayan (C) to her home for investigations into a case involving the starvation and death of her domestic worker in Singapore. - A Singaporean woman who starved, assaulted and ultimately killed her domestic worker was sentenced to 30 years in prison on June 22, 2021, with the judge describing the case as "among the worst types of culpable homicide". (Photo by SEAH Kwan Peng / STRAITS TIMES / AFP) / - Singapore OUT / -----EDITORS NOTE --- RESTRICTED TO EDITORIAL USE - MANDATORY CREDIT "AFP PHOTO / THE STRAITS TIMES/ SEAH KWANG PENG " - NO MARKETING - NO ADVERTISING CAMPAIGNS - DISTRIBUTED AS A SERVICE TO CLIENTS - NO ARCHIVES (Photo by SEAH KWAN PENG/STRAITS TIMES/AFP via Getty Images)

Singapore’s High Court sentenced a woman to 30 years in prison on Tuesday for killing her Myanmar domestic worker after more than a year of abuse that included starving, torturing and beating her.

Singaporean Gaiyathiri Murugayan pleaded guilty in February to culpable homicide among 28 charges related to her abuse of Piang Ngaih Don, who was 24 and subjected to 14 months of beating that culminated in her death in 2016.

Judge See Kee Oon said that though Murugayan, 40, suffered significant psychiatric problems, the offenses she committed were abhorrent and with purpose.

“The extremely aggravated and horrific circumstances of the offenses are crucial considerations that tip the scales towards retribution and deterrence,” the judge said in sentencing, according to a transcript provided by the court.

“She was cognizant of her actions and purposeful in her conduct. She did not lack capacity to comprehend what she was doing.”

Murugayan’s lawyer, Joseph Chen, said a family member of his client had asked him to file an appeal seeking a shorter prison term of 15 to 16 years so she could still spend time with her children upon her release.

“People with psychiatric disorder look at things differently, they cannot pull themselves out of the situation,” he told Reuters. “To the family member, the 30 years sentence is as bad as life imprisonment.”

Domestic workers in Asia and their supporters have long reported severe exploitation and abuse from employers, as well as poor or dangerous working and living conditions.

Most of these domestic workers are female migrants from Southeast Asian countries including Myanmar, Indonesia and the Philippines — and are offered few protections under their host countries’ laws.

In Hong Kong, for instance — a major destination for Filipino workers — there are no laws around maximum working hours per day or week, meaning many are forced to work 16-hour days or longer.

In Singapore, domestic workers’ plight gained widespread attention in 2012 — by May that year, 10 domestic workers had fallen to their deaths from high-rise apartments while carrying out tasks such as cleaning windows.

A number of these deaths take place each year, despite laws in place to prevent dangerous duties, due to lack of enforcement by authorities, say activists.

Despite calls for change over the years, there have been few improvements or true reform.

A 2017 study involving nearly 800 domestic workers in Singapore found that some 60% experienced exploitation by employers, with workers reporting low pay, little time off work and verbal and physical abuse.